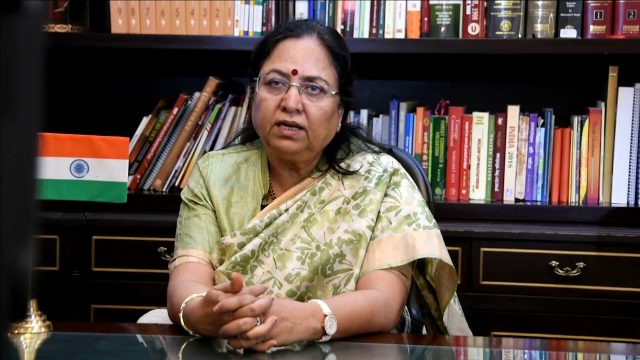 Dehradun, 25 Aug: Governor Baby Rani Maurya took oath as the 7th Governor of Uttarakhand on 26 August, 2018. The Governor is the constitutional head of the State. Governor Maurya has fulfilled all her constitutional responsibilities gracefully along with giving importance to the fact that along with considering the constitutional limits and responsibilities an elected popular government in the State should receive necessary guidance.
Governor Maurya has a long experience of administrative and public life which has been reflected in first year of her tenure. She has been dedicated to the interests of women and children. Within a week of taking charge, she visited all the districts of the State and met the people. She met the women, farmers and public representatives and observed the problems and possibilities at the grassroots level. Governor Maurya has visited the Garhwal and Kumaon circles of the State extensively, held meetings with various districts level officers and tried to understand the state deeply. During the visits to the districts, she went to girls’ schools particularly and talked to the students. She met the women self help groups in the districts and saw their products. She firmly believes that a big change is possible in the economy of the hill regions by promoting self-employment among women.
The Governor discussed various issues with the students and principals of various governmental and private schools during her Nainital visit. She obtained information on the efforts being taken by all the educational institutions to protect the children from drug addiction and sexual assaults.
She has barred forms of address such as “Her Excellency”. Within a week of taking charge, Maurya undertook a surprise inspection of the “Nari Niketan” in Dehradun and issued necessary directions to the officials there. She has focussed on appointment of teachers, doctors and supporting staff in the schools and hospitals of the state.
Governor Maurya is also Chancellor of government universities. She believes that universities should ensure active partnership with government and society, and solutions to various social and economic challenges should be researched. She stresses on a job oriented syllabus in the universities. She has always been careful in appointing the vice chancellors. Vice Chancellors have been appointed in 6 universities over the last one year. The Governor has given authority to the executive council of universities as a “One Time Solution” for the transparent resolution of cases regarding pending affiliation of colleges for many years. This would sort out the problem of recognition of degrees of thousands of students who have completed their education.
Governor Maurya also organised a “Vice Chancellors’ Conference”. She has not only continued the best traditions established by former governors but also given directions to make them more attractive and beneficial by taking personal interest. Like previous years, the Flower Exhibition was organised at the Rajbhawan in Dehradun this year, too. Products from the local mini-industries were given space along with flowers this time.
The “Governor’s Cup Golf Tournament” was organised at the Raj Bhawan in Nainital. A competition category for school children was also introduced. She also established the “Best Research Award 2018” on 25 April, 2019. Local language-Culture categories have been added as part of the Governor’s Research Award this year. This includes an award for Sanskrit Teachers. The ‘Devbhoomi Samvad’ magazine of the Raj Bhawan has also been published.