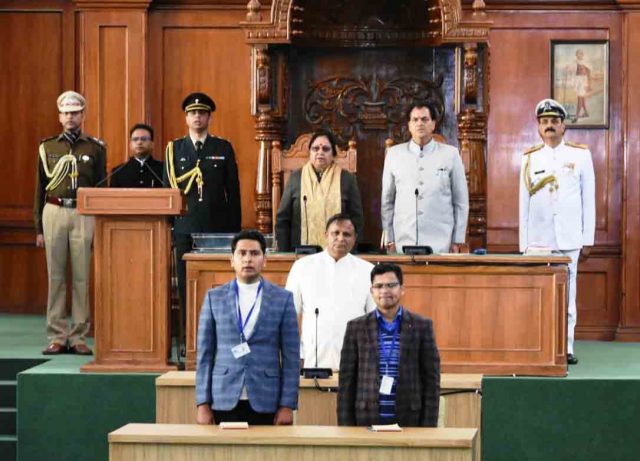 DEHRADUN/Gairsain, 3 Mar: Addressing the House on the opening day of the budget session of the Assembly being held at Gairsain, Governor Baby Rani Maurya, today, focussed on the achievements and plans for development of Uttarakhand. The Governor’s address, read amidst uproar by the opposition members, focussed more on e- governance initiatives taken by the state government, the ease of doing business initiative of the state government, and rural development initiatives. Following the Governor’s address, the house was adjourned till tomorrow morning. The budget is also likely to be presented tomorrow. While many of the achievements listed by the Governor in her address delivered on the first day of the first assembly session of the New Year pertained to the centrally-aided projects, some achievements of the state government, particularly towards welfare of armed forces personnel, were also highlighted. Even as the Governor read her speech, the opposition members kept shouting slogans, many remained standing, while some had positioned themselves in the Well of the House. Maurya declared that the state government was committed to bringing in e-governance systems in various areas of administration and record maintenance in order to ensure the public better access, as well as to prevent frauds in revenue records. She said the government was in the process of implementing online auditing of government accounts and records by implementing the Uttarakhand Management Systems Software developed by NIC. She added that all the revenue and land records were being digitalised and every single property record would bear the GPS location with Latitude and Longitude mentioned to prevent any land frauds. The Governor further claimed that the state was doing particularly well in Ease of Doing Business. In the latest ranking done by the Union Government, Uttarakhand was now in 9th position, a big leap from the 23rd position in the past. Among the hill states, it was now ranked the topmost state. She added that the government was working hard to attract maximum investment to the state and had implemented 10 new promotional polices concerning 8 major sectors to attract greater investment. So far, 457 MoUs worth Rs 21,270.97 crores of investment had been brought on ground. The focus was a cluster based approach according to suitability of each sector in a particular zone, she added. She also talked about rural sector development projects, claiming that her government had constructed 75 kms of new motorable rural roads linking 279 villages to the main roads and this had benefitted about one lakh of rural population. She also pointed out that work was rapidly underway on 36 projects related to the All Weather Road Project in the hills, which would entail construction of 616 kms of roads motorable in all weather conditions. She also stated that an e-Panchayat system would soon be fully implemented in the state. The government was committed to preservation of forests and environment, she said, adding that the number of tigers and elephants had gone up significantly as compared to the year 2006. Admitting that the state was vulnerable to natural disasters, Maurya said that an amount of Rs 17.94 crores had been released for relocation of 609 families from 22 disaster prone villages. She also highlighted the focus on agriculture and animal husbandry and added that the government was committed to encouraging artificial insemination of cattle by sex-sorted semen, which would give birth to female calves. So far, one lakh sex sorted semen straws had been prepared for insemination. She informed the House that milk production in the state had reached the level of 1.85 lakh litres every day. Under the Pradhan Mantri Awas Yojana, more than 13,000 houses had been provided to eligible persons from economically weaker sections of society. Her address also dwelt on labour welfare measures, health and sanitation measures as well as women empowerment schemes. She promised that, in FY 2020-21, more than a thousand kilometres length of roads would be constructed or repaired. She claimed that green technology was being used for road construction in the state. She also mentioned achievements regarding the Atal Ayushman scheme, adding that 34 lakh persons had been given Atal Ayushman Golden cards so far. She also informed the House about ongoing upgradation and modernisation of hospitals and Community Health Centres. Speaking about the Power Sector, she said that projects of up to 5 MW had been reserved for investors from Uttarakhand, only. She also highlighted some measures being undertaken for welfare of the families of serving and ex- defence personnel and to encourage Sanskrit education in the state. Earlier, the Budget Session commenced with the welcome of the Governor to the House. After the address, the house was adjourned till tomorrow morning. Later, a Cabinet meeting was also held at the CM’s office.