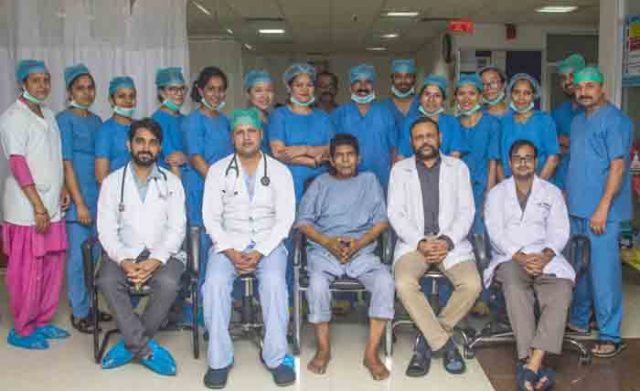 Dehradun, 26 Jul: The team of Heart Disease specialists of Shri Mahant Indiresh Hospital (SGRR) has blessed a patient with a new life. The patient had reached near death due to neglect and lack of awareness. The Cardiologist and the Cardiac Surgeon saved his life through successful procedures. Virendra Singh (61 years), a resident of village Kotsara, Kot Block, Pauri, is a farmer by profession. In the first week of June, he suffered pain in the chest. He ignored it considering it normal and just took a few painkillers. Due to continuous pain, he came to Shri Mahant Indiresh Hospital (SGRR). The doctors after an initial check-up diagnosed that Virender Singh had suffered a severe Heart Attack. Dr Amar Upadhayay carried out Angioplasty and opened the blocked artery of the heart. After Angioplasty, the patient remained normal for 4 to 5 days, but then his blood pressure started falling and he became unconscious. The doctors gave him CPR. Ordinarily, no patient exhibits such symptoms. The doctors on re-investigation diagnosed that one of the muscles of a part of the heart was bleeding. This condition is called ‘Blow Out Rupture of Left Ventricle’. Dr Amar Upadhayay inserted a catheter in to the heart chamber and saw the Pressure Wave Form and found blood retention in the outer part of the heart. This is a clear indication that there was a severe problem in a part of the heart. Dr Upadhayay and his team brought out the blood from the outer part of the heart via Urgent Pericardia Sentisis. The blood was re-transfused into the patient via the vein of the leg, otherwise it would have resulted in severe blood shortage in the patient. This type of a procedure is highly dangerous. After this procedure, slowly the blood pressure of the patient became normal. Cardiac Surgeon Dr. Ashok Jayant repaired that part of the muscle of the heart which was bleeding. During the operation, the patient was transfused 32 units of blood. The patient is now recovering speedily and will be discharged within the next one-two days.