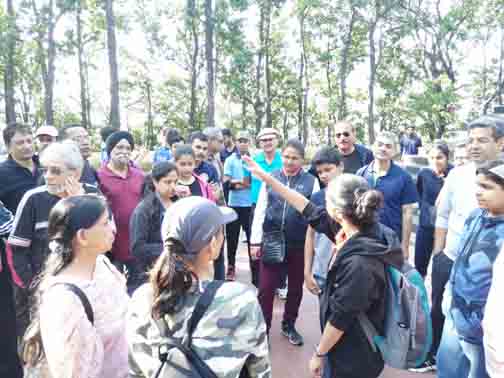 Dehradun, 13 Oct: A Heritage Walk, which was headed by Sargam Mehra, started from Khalanga Memorial and ended at
Khalanga Top, was undertaken today as part of the ongoing Virasat Festival. It was a 3 hour walk and was joined by 90 people. The walk focused on the Kalanga and Nalapani battles.
There was also a Kathak performance by Shinjini Kulkarni, who is the grand-daughter and disciple of Pt Birju Maharaj. She learnt Kathak from him at a very young age.
“My training was formal and strict accordance with the guru-shishya parampara,” she pointed out on the occasion. “But as a grandfather, Nana shared so many anecdotes on his early days, experiences in Lucknow, which engaged me as a child. For me, this was the best of both the worlds,” says Shinjini. Shinjini has also acted in films in three languages. “Once my college days were done and I was preparing for the Civil Services, a few friends and family members approached me with a movie offer. So I ended up acting in some movies. However, I don’t want to let go of my passion for dance for anything.”
The Nooran sisters regaled the audience at the Ambedkar Stadium, the venue of the festival, with their Sufi music. Jyoti and Sultana, the Nooran Sisters, belong to Jalandhar and are very rooted in their linguistic and musical traditions. Their grandmother, Bibi Nooran was a well-known singer of her time, and the Nooran sisters now follow in her footsteps. Hailing from a family of musicians, the girls have been trained in the field of traditional Sufi music for many years by their father, Ustad Gulshan Mir, son of the famous late Ustad Sohan Lal. He is also a grandson of the late Bibi Nooran, a renowned Punjabi Sufi singer of her time in the ‘70s. He trained them in Sufi music and they decided to sing only Sufi songs. In the field of Indian traditional music mostly it is passed on from one generation to the next.
They have performed at various prestigious festivals throughout the Indian subcontinent and abroad. Their albums and movie songs are a great hit.
On 14 October, Virasat Saadhna will be held at 10 a.m., involving performances by upcoming talents. The venue will be the Ambedkar Stadium. At 7 p.m., there will be Hindustani Vocal by Meeta Pandit, followed at 8 p.m. by yesteryears’ Bollywood Music on the Accordion and Hawaiian Guitar by Sanjeev Sachdev and Sonali Nath.