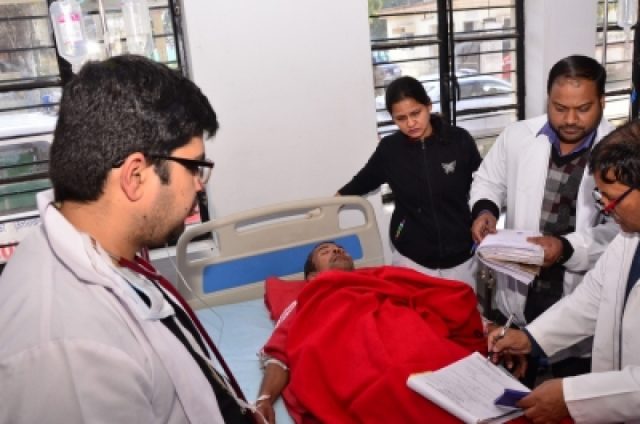 DEHRADUN, 21 Feb (IANS): Life will never be the same for Mange Ram (38) of Balupur village in Haridwar, a survivor of the hooch tragedy that claimed more than 100 lives in Uttarakhand and Uttar Pradesh.
Though Ram, the only breadwinner of his family, survived the tragedy, he lost his vision. The blindness that has befallen Ram could be permanent, doctors said.
Similarly, Suresh Chand (45) of Bindukharak village in Haridwar became blind after consuming the spurious liquor.
“Methyl alcohol or methanol is dangerous for the human body and can damage the optic nerve and cause permanent blindness,” said Dr Rakesh Gupta, an ophthalmologist.
The government doctors said they have seen such reports in local media. “We will send a team of doctors to verify these reports of blindness and provide treatment, if needed,” said Dr H.K. Shakya, Chief Medical Officer (CMO) of the Haridwar district.
These are not the only cases of people losing sight due to the spurious liquor. Nearly a dozen people in several villages of Haridwar and adjoining Saharanpur district too have lost their vision.
“We have also received reports of blindness,” confirmed Ashok Kumar, Director General of Police (Law and Order).
The state excise department and the police are likely to shortly launch a campaign against the spurious liquor in the district through social media and with the help of NGOs.
The hooch death toll in the Haridwar district alone has reached 43.
The state government is enacting stringent laws to curb the spurious liquor business, which has been thriving in the backward areas of the state.