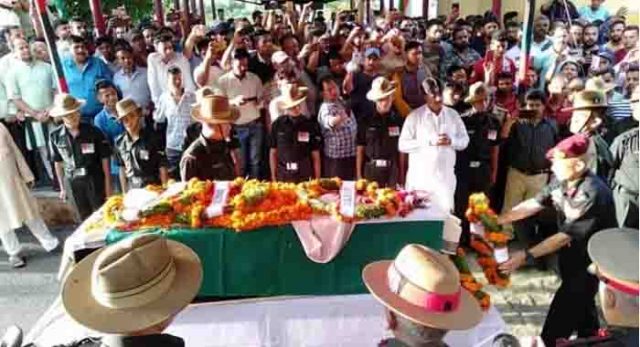 DEHRADUN, 18 Aug: The mortal remains of Lance Naik Sandeep Thapa, who was martyred in an exchange of fire with Pakistani troops in the Nowshera sector of J&K, were brought to Jolly Grant Airport by helicopter, here, today. The flight was delayed owing to bad weather. A large number of people bid him an emotional farewell and took part in his last rites. His body was received at the airport by jawans of the Army, relatives and officials, all of whom offered floral tribute. Following this, the body was taken to his residence in Sahaspur. The last rites were performed with military honours at the Premnagar crematorium. Hundreds has turned out on the occasion, including a number of dignitaries. Sandeep Thapa belonged to the 3/5 Gorkha Rifles. He was posted to the Nawshera Sector in Rajouri District of J&K. He was 33 years old and joined the Army in 2004. He had last visited home in June, this year. He was married in 2012 to Nisha Thapa of Doodhli. They have a three year old son. Sandeep’s younger brother, Naveen, too, is in the Army and deployed in Rajouri.