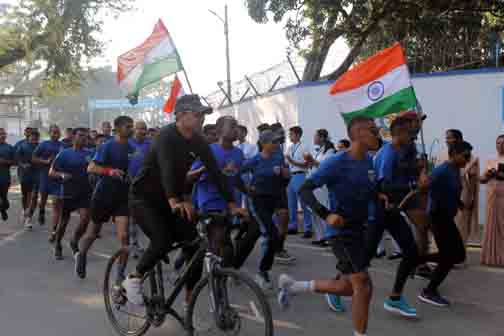 DRASS, 10 Oct: The ‘Kargil to Kohima (K2K) Ultra Marathon Glory Run’ was flagged off from the Kargil War Memorial, here, by Air Vice Marshal PM Sinha, Air Officer Commanding J&K. To commemorate the 20th year of the Kargil victory and to live up to the true tradition and motto of IAF – Touch the Sky with Glory – the unique expedition is being undertaken by IAF from the Kargil War Memorial to the Kohima War Cemetery in Nagaland. Kohima and Kargil are the two forward most outposts of India in the east and in the north. Here the two fiercest battles were fought in 1944 and ’99. The expedition commenced on 21 September and will culminate on 6 November. The team of 25 air warriors will cover a distance of more than 4500 kms in 45 days by running an average of 100 km per day. The aim of the expedition is to promote awareness of pedestrian safety and the Fit India movement initiated by PM Narendra Mode, and to pay tribute to the bravehearts who have made the supreme sacrifice for the motherland. The team has undergone rigorous selection trials and strenuous training at Leh. The team also has 1 female officer, Flt Lt Rishabhjeet Kaur, and WO IP Singh, who is 51 years old. The expedition is being led by Sqn Ldr Suresh Razdan who is a Su-30 pilot. The team will run through the terrains of Ladakh, HP, Punjab, Uttarakhand, UP, Bihar, West Bengal, Assam and Nagaland. The IAF has been promoting adventure activities for its personnel and has achieved feats at the national and international levels. The team arrived in Dehradun, today, and the entire support was rendered by 1 Air Force Selection Board at Clement Town.