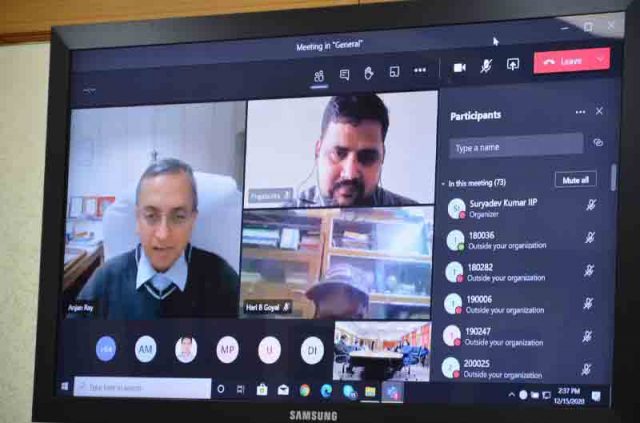 By Our Staff Reporter
Dehradun, 16 Dec: CSIR-Indian Institute of Petroleum (IIP) organised a virtual ‘‘Vigyan Yatra’’ – IISF 2020 programme on 15 December.
Initiating the programme, Dr Suman Lata Jain briefed the audience about the programme outlines of Vigyan Yatra – IISF 2020. Dr Anjan Ray, Director, IIP, welcomed all and introduced the Chief Guest, MP Prajatantra Gangele, State Organising Secretary, Vigyan Bharti Malwa Prant. Dr Ray said that India is on the path to self-reliance. He assured that the research being carrying out at the institute was focused on the welfare of society and mentioned the example of the “Gaon-Gaon Main Diesel” process.
Prajatantra Gangele threw light on the aims of the India International Science Festival. He recalled its journey over the last six years since inception in 2015 at IIT, Delhi. This year, the 6th IISF would be held on 22-25 December on virtual platform. The objective is to take science to society from universities, research laboratories. VIBHA would organise various scientific conferences under it. A total of 40 programmes have been targeted, such as a few Vigyan Samellans, Women Science Conference, and Agriculture Technology Conference to connect farmers with technology; Conference on waste-to-income oriented waste management, Conclave related to science and technology for promising PwDs, etc. He revealed that the Prime Minister would inaugurate the IISF 2020 and the President would grace the Valedictory Function.
Gangele emphasised that science should be “laboratory to society and society to laboratory”. He congratulated the Indian Institute of Petroleum for the efforts being made by the institute in this direction.
An “Overview of CSIR-IIP” was presented by Dr Anil Jain. Dr Saleem A Farooqui, CSIR-IIP, delivered a talk on “Production of Bio-jet Fuel from Non-Edible Oil as Feedstock”, and Dr Swapnil Divekar, CSIR-IIP, presented a talk on “Upgradation & Utilisation of Biogas”. There was a popular lecture by Dr Neeraj Atray, CSIR-IIP, on “Non Edibile Oils/Used Cooking Oil: Potential Source for Biodiesel” followed by a Short Film on the process.
Dr Hemwati Nandan, Assistant Professor Gurukul Kangri Vishwavidyalaya, Haridwar, delivered the concluding remarks.
Dr Jyoti Porwal proposed the vote of thanks.