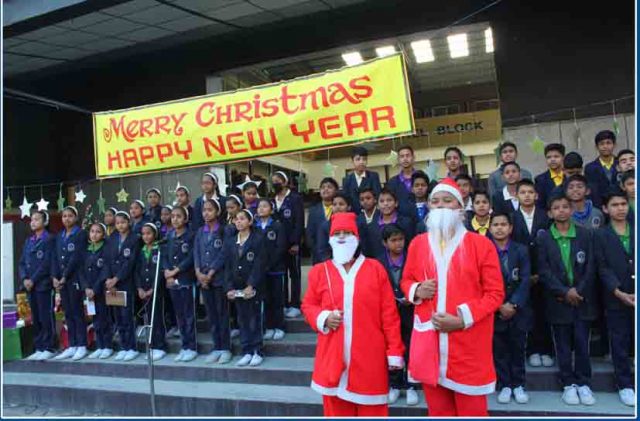 By OUR STAFF REPORTER
DEHRADUN, 21 Dec: Classes VI A and VI B of the Indian Cambridge School conducted the final assembly of the year on the Christmas theme.
The stage was well decorated with Christmas trees, gifts, Santa Claus, reindeer, snowman, etc. The entire class took part in the event. The students shared the meaning of Christmas, which is about giving and sharing. Christians believe that Jesus was the gift that God wanted to give to mankind. Therefore, Christmas is also a festival of giving.
The assembly was conducted by a few students of both the sections. They shared information about the Christmas Tree, Santa Claus, Reindeer, etc. Each symbol was explained, followed by Christmas carols.
Christmas songs sung by all the students of classes VI A and VI B were – ‘Santa Claus is coming to town’, ‘Go tell it on the mountain’, ‘Mary’s Boy Child’, ‘Rudolph the Rednosed Reindeer’, etc. With a lot of fun and excitement, the assembly concluded with singing of ‘Jingle Bells’, ‘We wish you a Merry Christmas and A Happy New Year’.
Students of pre-primary were also part of the celebration and had their own message to share about Christmas. The students received small presents as part of Christmas celebration by Santa. Students of class VI A and VI B prepared Christmas cards which were given to the Principal, Coordinator and teachers during the assembly. The students were helped by the class teachers of VI A and VI B, Dipti Khati and Shefali.
Awards were presented for Overall Best Performance in Sports, Cultural and Literary activities, and Academics. The Cock House Trophy was bagged by Compassion House, and the runner up was Devotion House.
School Director Syed Mohammed Yasar and Principal Rachana Srivastava congratulated the house mistresses, Priyanka Bhatt (Compassion House) and Urvashi Panwar (Devotion House).