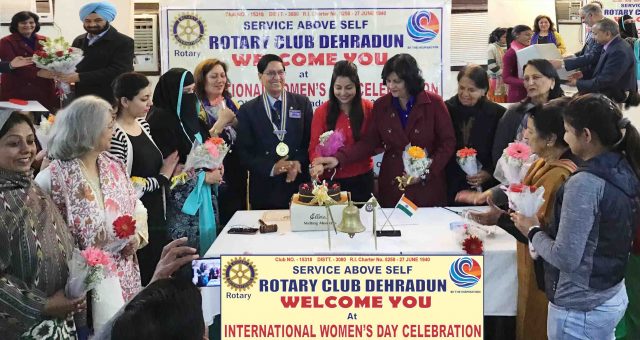 By OUR STAFF REPORTER
CHANDIGARH, 7 Mar: Dr. Sona Kaushal Gupta renowned Neurologist and Psychologist of Doon delivered a thought provoking talk to the Rotarians on “ Contribution of Women in balancing the Society “ in a special meeting, which was appreciated by one and all. To mark the significance of the day The Club distributed five sewing machines to the underprivileged girls to enable them to make a living. A sum of Rupees 15,000/- was also handed over to the mother of a local girl whose marriage is going to be held in this month by Rtn. Dr. S. Farooq. A cake was cut by Payal Arya the first Antartica female who was also honored in the field of contour & GPS survey in Antartica by the Club for her achievement. The meeting also had the flavor of male members complementing their spouses in one sentence. All the ladies were offered a bouquet as a mark of honor by the President Rtn. R.K. Bakshi and Secretary Rtn. Naghma Farooq. A poem on the occasion was also read by Asha Srivastava.
Rotarian Patricia Hilton the coordinator of the programme proposed the Vote of Thanks. Present on the occasion were Rotarians Dr. S. Farooq, Rtn. D.S. Mann, Rtn. Rakesh Agarwal, Rtn. David Hilton and most of the senior Rotarians and Annes and the Hall was jampacked.

Garhwal Post has established itself as a credible, balanced and forward looking newspaper in India. Based in Uttarakhand, the daily is read by the aware, socially and culturally responsible, high-income elite of society.
Contact us: info@garhwalpost.in
best real free hookup site https://garhwalpost.in/funniest-dating-headlines/ meet guys