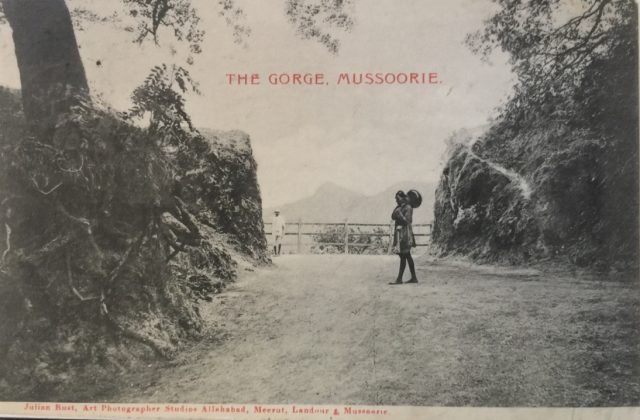 ‘ Oye Kala-angrez!’ yelled Austin, my senior in college, while seated on on his perch at the booking counter of the State Roadways Bus Terminus in Kingcraig. He seemed to get a kick out of it, just like many others who have flung the jibe at me down the years. ‘Lack of oxygen!’ consoles my friend Professor Sudhakar Misra, adding: ‘Combined with ultraviolet, it over-heats the brain.’Of course, like other locals, I too have learnt to shrug off the effect, or live with it, or sometimes leaven it with dollops of black humour. We the Landour-born have a sort of immunity, which cannot be said of outsiders settling down. For them there is no escape. They are always like Alice in Wonderland trying to figure out:‘What sort of people live about here?’ ‘In that direction,’ the Cat said, waving its right paw round, ‘lives a Hatter: and in that direction,’ waving the other paw, ‘lives a March Hare. Visit either you like: they are both mad.’ ‘But I don’t want to go among mad people,’ Alice remarked. ‘Oh, you can’t help that,’ said the Cat: ‘We’re all mad here. I’m mad. You’re mad.’ As mad as someone dressed in formals, on all of whom you can safely lay a bet that they are going to either of three things: a funeral, a housewarming or a wedding. It was at one such occasion that I again bumped into Austin again one day. By then I had found out that, believe-it-or- not, his full name was Austin William Benjamin Makepeace McGregor. (What a one mouthful for a name!) But that my friends, you have my word of honour – and cross my heart – it was what his doting parents had christened him at the Methodist Church in the summer of 1940. ‘That’s the name in the college register,’ Misraji confided. Ah! Finally, I had the prefect reply if he were to call me a Garhwali angrez again. Now in retirement he had moved to a house above Bhatta village, turned couch potato and become a stay-at-home type. Only outside his comfort zone, could one turn the knife with: ‘Who gave you this long-winded name? Where did they get it from? How many tombstones did your parents steal from? Though not today. Not when he is dressed to kill in a white linen suit. He refuses to rise to the occasion or bite the bait. ‘Arrey! I thought you were dead!’ I tease. ‘How did you crawl out of your coffin in Camel’s Back cemetery? Or did you dig up an old grave to get this suit?’ ‘Sush! Quiet Garhwali angrez!’ he whispers to me. ‘Don’t tell anyone! This is my old wedding suit that I found at the bottom of a tin trunk. What a mess it was in! I took it down to Bandbox, that famous drycleaner’s shop on Rajpur Road in Dehradun, where their bill boy at the counter sized me up, shook his head to say: ‘Bahut mehnga hoga dry-cleaning! Ja apney sahab koh bata kay ana!’ (It’ll be really expensive to dry-clean! Go tell the Sahab first!) ‘Stepping out, I hung around a nearby lane, trying to avoid the salesman’s line of sight, pretending to go home and ask the sahab. An hour later and I told him the sahab had agreed. So here I am. Now wipe that smile off your face. And no more wisecracks about my white suit!’ That suited me perfectly. By now I too have perfected the art of living with the hillside’s other residents: merchants, traders, writers, poets, artists, actors, filmmakers, faith healers and antique dealers. For instance, the other day, out for a walk with, John Das, my friend of old who had come out on a visit, when a new-comer brushed past us. ‘Is he married?’ I wondered aloud. ‘One never sees his wife!’ Little did I know that John did not like this intruder in our midst. He snapped back: ‘I think he’s a confirmed bachelor, just like his father and grandfather. No one in his family ever got married!’ That’s why they say if you ask a dumb question, you get a dumb answer.