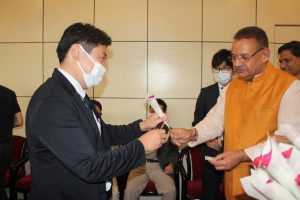 A loan agreement has been signed between the governments of Japan and India in this regard. The project is proposed to be operated in the four hill districts of Tehri, Uttarkashi, Nainital and Pithoragarh as a pilot and may spread to other districts in the later stage. Under this, activities like hi-tech nursery, micro-irrigation, promotion of European vegetable production, are also proposed to be conducted along with establishment of Centre of Excellence for Kiwi, and off season vegetables.

Minister Ganesh Joshi said that Prime Minister Narendra Modi is constantly striving to double the income of farmers. There is immense potential in the field of horticulture in the state of Uttarakhand. To increase the income of farmers and to make horticulture important for the economy, the Uttarakhand Integrated Horticulture Development Project will prove to be a milestone. With the completion of the project, a large number of fruit growers will take interest in the production of fruits like kiwi, walnut and apple, which will strengthen their economy.

He urged the Japanese team to first test the feasibility of these schemes in the state by conducting pilot projects of kiwi, strawberry, cherry and other such horticultural products in which it has research and technical proficiency. Along with this, work should be done on the possibility of developing horticulture tourism and agricultural tourism as a by-product.

Garhwal Post has established itself as a credible, balanced and forward looking newspaper in India. Based in Uttarakhand, the daily is read by the aware, socially and culturally responsible, high-income elite of society.
Contact us: info@garhwalpost.in
https://garhwalpost.in/date-night-plans/ https://garhwalpost.in/flower-mound-singles/ single at 36 woman