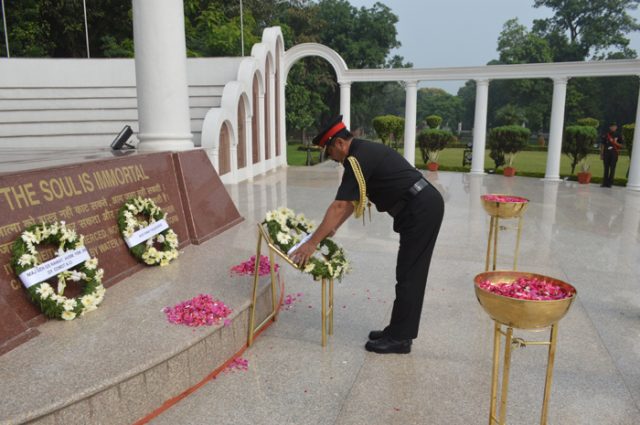 DEHRADUN, 26 Jul: The Indian Military Academy today commemorated the 20th Anniversary of the successful culmination of Operation Vijay, more commonly known as the Kargil War, with a ceremony to honour the Martyrs at the Indian Military Academy War Memorial. IMA Commandant Lt Gen SK Jha laid the wreath along with Maj Gen GS Rawat, Deputy Commandant & Chief Instructor, to pay homage to the martyrs. Academy Under Officer Vinay Vilas Garad, the senior most amongst the Gentlemen Cadets, laid the wreath on behalf of all the Gentlemen Cadets at the Academy. Operation Vijay will always remain adorned in the war archives as a collection of the most fiercely fought battles in which the brave soldiers overcame seemingly insurmountable odds, hostile terrain, weather, and a determined enemy occupying dominating heights, and brought glory to the Motherland. The themes for the 20th Anniversary celebration of the Kargil Victory were ‘Remember, Rejoice and Renew’. Where we ‘remember’ our martyrs by revisiting the sacrifices that instill a sense of pride and respect among us, we ‘rejoice’ by celebrating the victory in Kargil and we ‘renew’ our resolve to safeguard the honour of the Tricolour, it was stated on the occasion. The determined and daring junior leadership, the raw courage of the jawans at the tactical level and the swift execution of tri- services military strategy and plans displayed during the Kargil war shall remain legendary and will always inspire the country and its youth in the years to come.