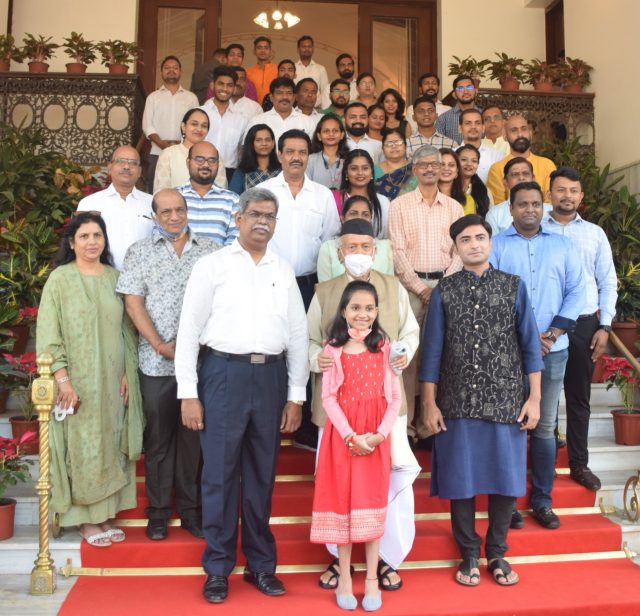 Dehradun, 14 Dec: Maharashtra Governor Bhagat Singh Koshyari presented awards to individuals and Ganesh Mandal winners of the Eco Friendly Ganeshotsav Competition at a function held at Raj Bhavan, here, on Tuesday. The competition was organised by Marathi news channel ‘Lokshahi News’.
Director of the news channel Ganesh Naidu, Director Shirish Gadiya and Executive Editor Narendra Kothekar were prominent among those present.
Speaking on the occasion, the Governor called upon the Ganesh Mandals to increase the outreach and quality of their work rather than insisting on increasing the height of Ganesh Murtis. He said, the Ganeshotsav started by Lokmanya Tilak had today spread to every nook and corner of the country and is celebrated even in other countries. He called upon Ganesh Mandals to work with the spirit of unity and contribute to strengthening democracy.
Five Ganeshotsav Mandals, namely Sankalp Mitra Mandal, Balgopal Mitra Mandal, Yuva Ganeshotsav Mandal Dadar, Jaibhavani Mitra Mandal, Naigaum and Shiv Chhatrapati Ganeshotsav Mandal were given the top awards by the Governor. Ten individual awardees were also felicitated by the Governor.
Executive Editor Narendra Kothekar delivered the welcome speech, while news anchor Vishal Patil conducted the proceedings.