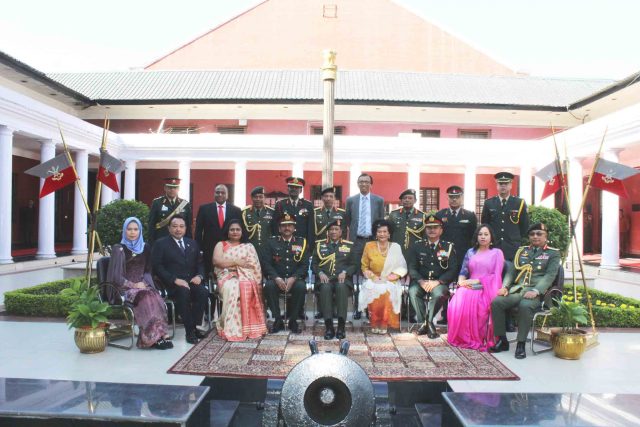 DEHRADUN, 18 Nov: Al Aminul Karim Sultan Sallehuddin Ibni Almarhum Sultan Badlishah, Sultan of Kedah Darul Aman, Malaysia, visited the Indian Military Academy (IMA), here, today. The Sultan had undergone his training here as a Gentlemen Cadet from July 1962 to June 1963, before he assumed his appointment as a Lieutenant in the Royal Malay Regiment. It was a nostalgic journey down memory lane for him to have visited his alma mater. The Sultan interacted with the Gentlemen Cadets and staff at IMA and got a firsthand update on the way training has transcended over time and evolved from his training days. The Sultan along with his wife, Sultanah Maliha Binti Almarhum Tengku Ariff, was given a windshield tour of the training and administrative facilities at IMA. The Sultan was a keen sportsman and played football in the Academy during his training days. He also interacted with the Commandant, Lt Gen SK Jha, and Major General GS Rawat, Deputy Commandant. He conveyed his gratitude and good wishes to the Academy for the professionalism with which training is being imparted to the Gentlemen Cadets today.

Garhwal Post has established itself as a credible, balanced and forward looking newspaper in India. Based in Uttarakhand, the daily is read by the aware, socially and culturally responsible, high-income elite of society.
Contact us: info@garhwalpost.in
dating behavior psychology https://garhwalpost.in/date-6-weeks-from-now/