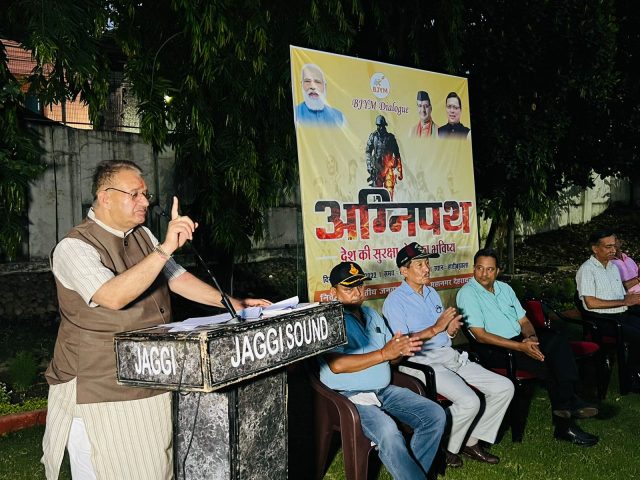 Dehradun, 27 Jun: An interactive session was organised on Sunday by the Dehradun branch of the BJP Yuva Morcha under the leadership of Sainik Welfare Minister Ganesh Joshi on the ‘Agnipath Scheme, reality and myths’.

Minister Ganesh Joshi said that, from 2014 onwards, India is being transformed into a powerful country and adapting to meet the political, social, economic and strategic challenges of the 21st century world. This courageous process was begun under the leadership of Prime Minister Narendra Modi. Earlier, India was in a state of political paralysis.  Neither were the people of the country the focus of development nor was foreign policy proactive.

“The opposition parties are protesting in desperation because the politics of development has taken away their social base,” he declared.

National Vice President of the Yuva Morcha, Neha Joshi said that this event organised with Defence Officers and Defence Coaching Institute Operators was a very welcome step to clear the misconceptions on the Agnipath Recruitment Scheme. She hoped that this sequence of dialogue and communication would reach all the youths and their parents across the state. She added that Prime Minister Modi is not only raising India as a power, but is also gaining popularity by implementing welfare schemes focusing on citizens. Before 2014, schemes like gas supply to every household, water taps in every house, LED lights in every household and providing houses to the poor did not exist.

She emphasised that an excellent plan had been made to bring youth back into the society’s mainstream with a clear vision, disciplined approach and a lump sum entrepreneurship fund for their successful future, along with the opportunity to experience army life.

Garhwal Post has established itself as a credible, balanced and forward looking newspaper in India. Based in Uttarakhand, the daily is read by the aware, socially and culturally responsible, high-income elite of society.
Contact us: info@garhwalpost.in
singles in victorville