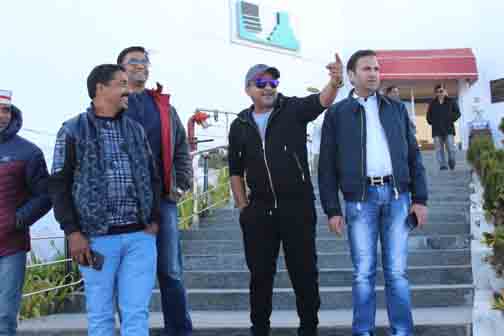 By Sunil Sonker
Mussoorie, 24 Dec: Music Director Sajid Khan, with his friends, reached Mussoorie, today. Talking with the media at Dunsvirk Court Hotel, Sajid said he was very pleased with the cold weather and beautiful scenery of Mussoorie. Mussoorie was one of his favourite hill stations and he came whenever he got a chance. The food was delicious and the nature of the people was friendly. He declared he was enjoying wearing warm clothes in Mussoorie, because in Mumbai the weather remained the same.
Sajid added that, on the occasion of New Year, Salman Khan’s film, ‘Dabangg 3’ would be released and the songs composed by him and brother Wajid would be liked by the people. He was hopeful that like ‘Dabangg 1 and 2, ‘Dabangg 3’ would also be blockbuster. He disclosed that he taught music to children athis Taleem Music School and, soon, songs sung by them would be seen on YouTube.
He also expressed grief at the death of the girl who was set afire by a stalker in Pauri. He said people should respect women. Each and every citizen of India should not forget the nation’s culture and civilisation.

Garhwal Post has established itself as a credible, balanced and forward looking newspaper in India. Based in Uttarakhand, the daily is read by the aware, socially and culturally responsible, high-income elite of society.
Contact us: info@garhwalpost.in
best site to meet international friends https://garhwalpost.in/appropriate-age-gap-in-relationships/