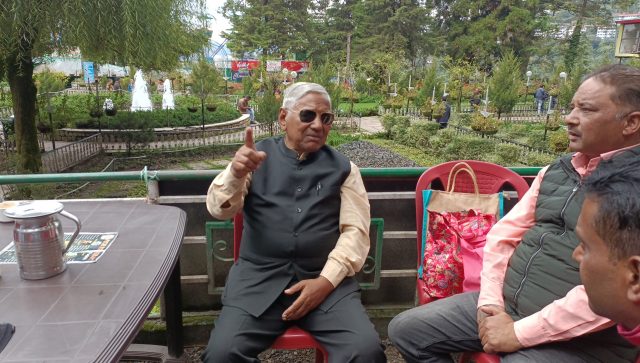 Mussoorie, 12 Oct: Folk singer Narendra Singh Negi arrived here, today, for the shooting of a song video. The shooting took place in Company Garden. While talking to reporters, Negi said the song is based on flowers. Now that the era of cassettes is over, in which 8 songs were required, now only one song can be uploaded on YouTube. He said that as he is aging, he is not able to sing like before, but in two-three months he would definitely release a song for his fans.

Expressing concern about the recruitment scam in Uttarakhand, he said that the government should think about the future of the youth and nepotism should be completely abolished. He recalled the sacrifices of the youth at the time of the Uttarakhand movement, but the dream could not be fulfilled. He said priority should be given to the people of Uttarakhand. He alleged that the top leadership of Uttarakhand has become insensitive. Politicians and scamsters have become kings and democracy has become a subject. He did say that roads have been laid in Uttarakhand, railway lines are being laid, but a lot is yet to be done for the development of the mountains so that migration could be stopped and employment made available.

He also commented on the Ankita Bhandari murder case and alleged that BJP leaders are running unauthorised resorts in which illegal activities are going on. He said the Congress had been wiped out in the state due to these reasons, and if the BJP doesn’t take care, it too would face the same fate.