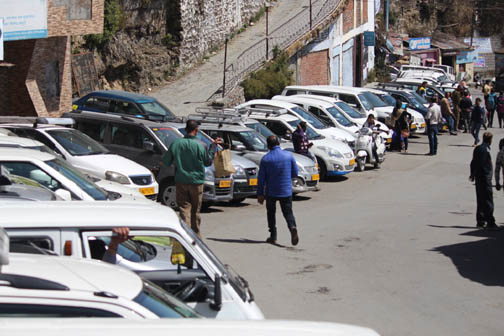 By Sunil Sonker
Mussoorie, 25 Mar: The Regional Transport Offices (RTOs) across the state have started commandeering taxis for election duty during the coming parliamentary election. As a result, Taxi Owners have registered the protest against the RTO. According to them, the tourist season is also going to start and with most of their taxis having been taken over by the RTO, they will have to suffer heavy losses.
Sunder Singh Panwar, Secretary, Mussoorie Taxi Owners’ Association, said that they were paid Rs 800 with diesel every day during election duty by the RTO, which was very low. He said the Election Commission had fixed the rate for small cars at Rs 1500 and Rs 3000 for cars such as Innova for the candidates participating in the election, therefore they ought also to be paid the same amount by the RTO. He further accused the RTO of delaying payment for the taxis. He said the taxi owners had no objection to sending their taxis on election duty, but they ought to be paid proper rates. He demanded that drivers of the taxis hired by the RTO ought also to be provided food and accommodation for the night as they had to face problems.
According to RTO, Dehradun, Arvind Kumar Pandey, the payment was released by the EC after the completion of the election, which sometimes led to payments being delayed. But, this time, he would ensure that taxi owners were paid on time and according to the standards.