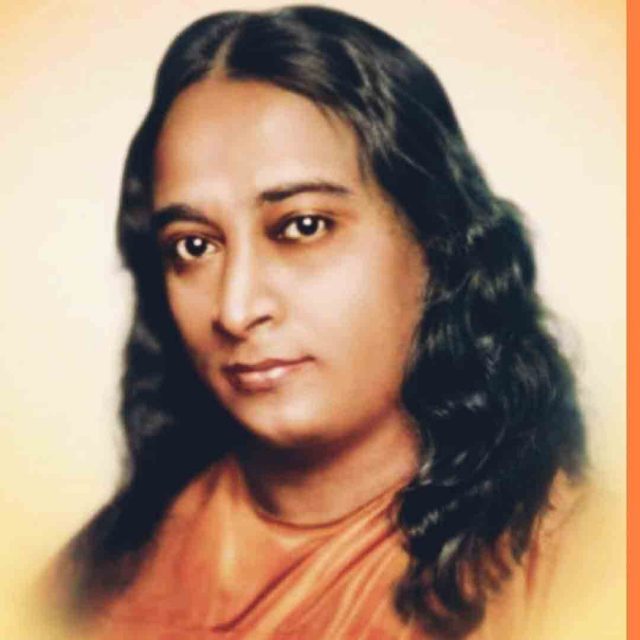 Paramahansa Yogananda was born Mukunda Lal Ghosh on 5 January, 1893, in the sacred city of Gorakhpur, into a prosperous and devout Bengali family. From his earliest years, it was evident to those around him that his awareness and experience of the spiritual was far beyond the ordinary. As a youth he sought out many of India’s saints and philosophers, hoping to find an illumined teacher to guide him in his spiritual quest.

In 1910, at the age of 17, he met the revered sage Swami Sri Yukteswar, in whose hermitage he spent the better part of the next ten years. After graduating from Calcutta University in 1915, he became a monk of India’s venerable monastic Swami Order, at which time he received the name Yogananda (signifying bliss, ananda, through divine union, yoga).

Sri Yoganandaji began his life’s work with the founding, in 1917, of a “How-to-Live” school, where modern educational methods were combined with yoga training and instruction in spiritual ideals. Visiting the school in 1925, the Father of our Nation, Mahatma Gandhi wrote: “This institution has greatly impressed my mind.”

Gandhiji and Paramahansa Yogananda met a decade afterwards when the latter made a return visit to India in 1935-36, after first touring parts of Europe and the Middle East. At the Mahatma’s request, Paramahansaji instructed him and several of his followers in the spiritual science of Kriya Yoga.

Paramahansa Yogananda founded Yogoda Satsanga Society of India (YSS) in 1917, and in 1920, he carried India’s sacred, soul-liberating science of Raja Yoga to the West, where, in Los Angeles, California (USA), he established the sister organisation Self-Realization Fellowship (SRF).

The non-sectarian and scientific yoga teachings of Paramahansa Yogananda have a universal appeal to people of all faiths and walks of life. Sri Yogananda founded YSS/SRF for the purpose of fostering a spirit of greater understanding and goodwill among the diverse peoples and religions of our global family by demonstrating the underlying unity of all humankind under the one God, and to provide peoples of all nations-irrespective of nationality, race, and religion with definite scientific Raja Yoga techniques of meditation, known as Kriya Yoga, that lead to the realisation of one’s full potential and the divinity of the human spirit.

Autobiography of a Yogi, Paramahansaji’s life story, was published in 1946 and expanded by him in subsequent editions. Recognised from the beginning as a landmark work in its field, the book has been in print continuously since its initial publication more than 72 years ago. Honoured as one of the 100 best spiritual books of the 20th century, it remains one of the most important, and most readable, works on Yoga and Eastern spiritual thought. It has been translated into 50 languages, including 13 Indian languages.

Among Paramahansa Yogananda’s other writings are acclaimed interpretations of Jesus’ universal teachings (The Second Coming of Christ: The Resurrection of the Christ Within You) and the Rubaiyat of Omar Khayyam (Wine of the Mystic: A Spiritual Interpretation), a multi-volume anthology series (Collected Talks and Essays on Realizing God in Daily Life), two collections of poetry and prayer, and numerous volumes of spiritual counsel. Yogoda Satsanga Society of India also publishes a series of rare audio recordings of talks given by the great guru during the latter years of his life.

An award-winning documentary feature film chronicling the extraordinary life of Paramahansaji, AWAKE: The Life of Yogananda, was released in 2014 and shown worldwide. Today, 125 years after his advent on earth, Paramahansa Yogananda is being increasingly recognised as one of the great spiritual sons of Mother India, a harbinger of Yoga to the West, and an incarnation of Divine Love who embraced the whole world.

Garhwal Post has established itself as a credible, balanced and forward looking newspaper in India. Based in Uttarakhand, the daily is read by the aware, socially and culturally responsible, high-income elite of society.
Contact us: info@garhwalpost.in
https://garhwalpost.in/top-asian-dating-sites/