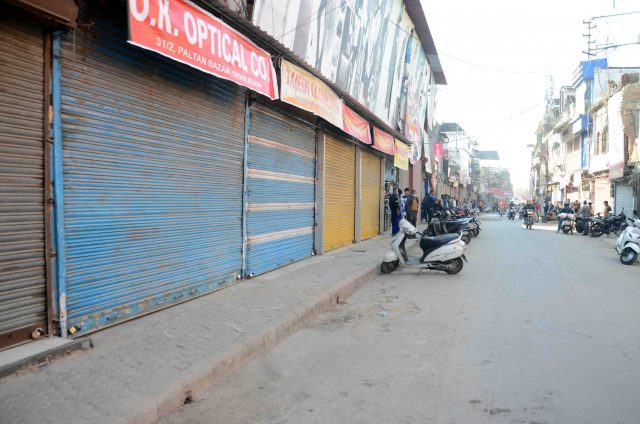 By Our Staff Reporter
Dehradun, 8 Dec: The impact of the ‘Bharat Bandh’ was patchy in Uttarakhand. It did not affect Dehradun and Haridwar districts too much, while Udham Singh Nagar and Pithoragarh registered a high level of protests, where markets, shops and petrol pumps were closed.
Markets were closed from morning in Udham Singh Nagar. Seeing the support for the protest, there was strong deployment of police. It was a mixed turnout in the district headquarters, Rudrapur. The Vypar Mandal had extended its support to the farmers, so the shops were shut. A similar shutdown was witnessed in Rudrapur. Transport services remained unavailable and the petrol pumps were closed. The SP-City and SP-Crime monitored the strong police contingent.
The case was similar in Khatima, with farmers taking out processions, appealing to shopkeepers to shut their establishments. 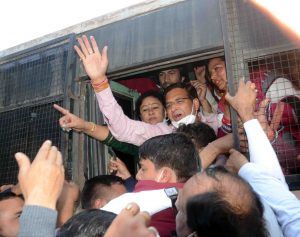 Mussoorie was largely unaffected. The shops remained open. The Uttarakhand Taxi-Maxi Mahasangh had also not extended support to the Bandh. The Congress, AAP and left parties held demonstrations.
The Congress demonstrated at Ghantaghar and raised slogans against the Union Government. They were taken into custody by the police. The road was blocked by State President Pritam Singh and party workers. The police intervened when they saw the situation getting out of hand.
Earlier, hundreds of party workers marched from the Congress Bhavan to the Clock Tower, where they staged a dharna. They demanded withdrawal of the new farm laws and raised slogans. They also obstructed traffic, causing jams on Rajpur and Chakrata Roads.
Pritam Singh claimed the ‘black laws’ would sell the farmers into the hands of the corporations.
The protest resulted in the Congress protestors being arrested and taken away by the police. They were taken to the police lines and, later, released on personal recognisance.