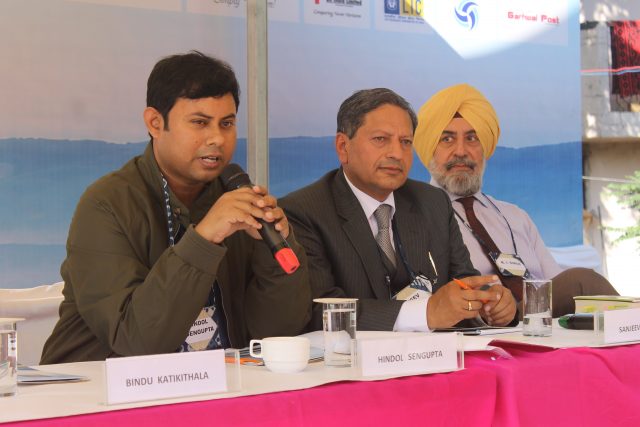 Dehradun, 16 Nov: One of the most interesting sessions at the on-going Valley of Words Literature and Arts festival was the discussion on noted historian and author Hindol Sengupta’s latest book on Sardar Patel, aptly titled, “The Man Who Saved India”. The panellists were curator of the festival and senior IAS officer Sanjeev Chopra, noted author Robin Gupta and Bindu Katikithala. The session was chaired by ex-chief secretary of Punjab RI Singh. It will hardly by hyperbolic statement to assert that perhaps no political figure in modern history who did more to secure and protect the Indian nation than Sardar Vallabhbhai Patel the first Home Minister of India. However, not much is known about him and he has been largely ignored by the prominent historians of India. Speaking about his book, Sengupta said that it was undeniable that it was the trinity of Mahatma Gandhi, Pandit Jawaharlal Nehru and Sardar Vallabh Bhai Patel who spearheaded the indepdence movement but while so much had been written by the historians after the independence about Gandhi and Nehru, they were niggardly in giving Patel his due. Sengupta also quoted Rajmohan Gandhi, the grandson of Mahatma Gandhi who also finds mentioned in Sengupta’s book that while the dutiful place was given in the history to Gandhi, adequate place given to Nehru but the country was niggardly in giving Patel his due. Sengupta pointed out that it was thirty years after Rajmohan Gandhi had highlighted this fact that a book had come out in respect of Patel’s contribution to modern India. Patel was responsible for uniting India and giving shape to its geographic boundaries post independence, otherwise the country would not be same as it existed today, Sengupta asserted. Sengupta further highlighted the fact that Patel had to wait for more than forty years since independence for the Bharat Ratna, which the highest civilian award in India, which he said was ironic in the sense that Bharat the nation owed its existence to Patel amongst others. It was Patel who brought together piece by piece the map of India by fusing the princely states to create a new democratic independent country that was India. In contrast to Gandhi and Nehru, Patel was a realist and a pragmatist who never hesitated to take tough decisions that were required to keep the country one. Sengupta also reminded that while Gandhi and Nehru wrote about themselves a lot and voluminously, Patel wrote no personal history. He is known to have stated to his daughter Maniben Patel that it was better to create history than write it. In response to the panellists queries with regards to his complex relationship with Nehru and Gandhi, Sengupta asserted that it was never his idea to pitch one historical figure against another but the fact remained that the relationship was complex. With regards to his famous “differences” with Subhash Chandra Bose, Sengupta observed that the differences were not personal but ideological and political. He also felt that Patel was Gandhian and therefore he opposed Bose on certain issues in favour of Gandhi. At personal level Patel did not assert himself while he argued and openly differed with Nehru on issues, he never opposed or refuse Gandhi. Sengupta was asked that being a strong nationalist that Patel was, why did he cede to certain demands of him made by Gandhi wherever his personal interests were compromised and to some extent even the country’s interests were at stake. Sengupta felt that Patel who had lost both his parents early on in his life, he perhaps looked upon Gandhi as a father figure and Kasturba Gandhi as a mother figure whom he could not just say no! Sengupta also said that Patel strongly believed in one India, one set of rules and was strongly opposed to special status to any state including Kashmir. The grant of special status to Kashmir was never discussed with him and he was forced to accept it. In response to a question, Sengupta agreed that had Patel lived longer than he actually lived after independence, India would not have faced many of the problems that beset India even now. He added that Patel ought to have lived for ten more years than he actually lived.