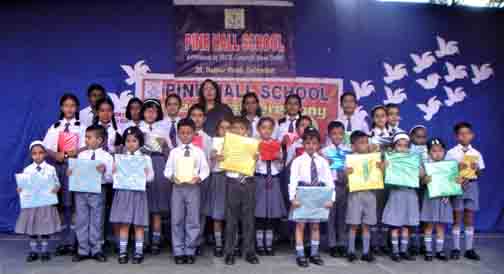 Dehradun, 12 Aug: The official ceremony of conferring titles and investing power to the members of the Student Council for 2019-20 was organised at the Investiture Ceremony held at Pine Hall School on Saturday.
The Principal, Dr Rama Anand, marked the beginning of the event by lighting the ceremonial lamp, followed by Saraswati Vandana.
The principal administered the oath and conferred the badges upon the student council members. The flags were handed over as a symbolic representation of handing over responsibility to the new office bearers. Speaking on the occasion, the Principal advised students to be the role models for fellow schoolmates and execute their duties with excellence.
Tanuj Rawat was declared Head Boy and Riya Grover was made Head Girl for the year 2019-20.Tilak House Captains were Aleena Fatima and Priyanshu Sharma. Saachi Sehgal and Jatin Thapa were declared Nehru House Captains. Sachin Shah and Sara Moses shared the responsibility as Captains of Gandhi House. Tushar Kukreti and Vishruti Bhatt became the Captains of Tagore House. The students pledged to work earnestly to uphold the honour and glory of the institution.
Annual Prize distribution was organised to give away the prizes to the meritorious students from class KG to XII of the school.
Shiraz Qureshi, topper of ISC 2018-2019, and Jyotiraditya Singh Guleria, topper of ICSE 2018-2019, were also felicitated on their success by the principal.
The teachers and the students encouraged the winners with thunderous applause as they walked up to the stage to collect prizes for their hardwork.
The principal distributed the prizes to the students appreciating their hardwork and will power to attain their goals successfully. She encouraged the students that winning should become their consistent habit and wished them good luck.
The programme concluded with the National Anthem.

Garhwal Post has established itself as a credible, balanced and forward looking newspaper in India. Based in Uttarakhand, the daily is read by the aware, socially and culturally responsible, high-income elite of society.
Contact us: info@garhwalpost.in
philippine women dating ivf fet due date