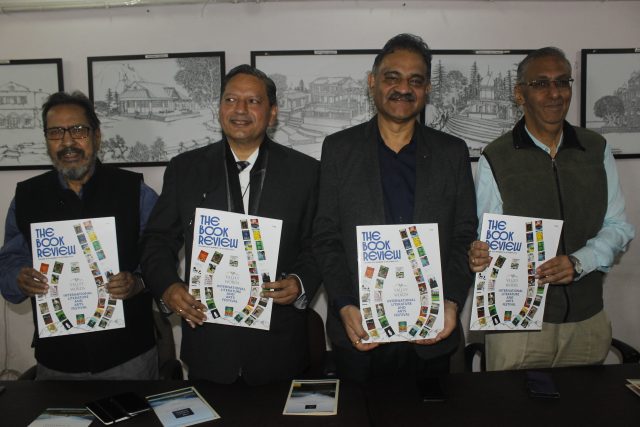 Dehradun, 12 Nov: The keynote address to the third edition of Valley of Words will be delivered by Rajiv Malhotra, noted scholar on Indic Civilisations and the head of Infinity Foundation on the theme of ‘Civilisation in the Age of Artificial Intelligence’. Author of the noted work ‘Being Indian’, he will be focussing on his current work of including the Sanskrit non-translatables, like Dharma, Shakti, Prana, Kama et al in the English lexicon. This was disclosed by the Honorary Curator of Valley of Words, Sanjeev Chopra, at a press conference held at the Doon Library and Research Centre, here, today. He was accompanied by Dr RS Dobhal, Chairman of Sustainable Development Forum of Uttaranchal (SDFU) and the Director of Uttarakhand Council of Science and Technology, who gave an overview of the seven sessions under the RS Tolia Forum.
These included sessions on Uttarakhand @20, Reverse Migration, Restoring Land for Prosperity, and the prospects of Industrial Development in the state. SDFU is also involved in supporting the pan-Himalayan exhibition of artefacts and handicrafts made by SHGs and civil society organisations.
Chopra said that the third edition of this open access, free entry festival at the Madhuban Hotel on 15-17 November would feature over two hundred authors, poets, painters, philatelists, critics and public intellectuals in seventy sessions, conversations, debates and exhibitions. All the short listed authors had been invited to the festival, and a special edition of The Book Review featuring all the books also brought out as a special volume which would be available at the VoW. A special focus of the sessions would be on Recuperating the Raj Narrative, writings from the North East, as well as translations into English and Hindi from regional languages. This was for the first time that translations as a category have been given due recognition.
Marigold as the flower of remembrance for the Indian soldier would also be launched and supported in the Military History and Strategy sessions at VoW. This initiative has been started by Maj Gen (Retd) Ian Cardozo, and is gaining traction in military history circles. The Military History Sessions, which are being curated by noted photographer and military historian Shiv Kunal Verma feature sessions on Siachen, Assam Rifles and the North East and a discussion on whether turf wars will continue even after the CDS. The offerings of MHS sessions are emerging as a salient feature of the VoW.
Hindi sessions will feature LS Bajpai, Mamta Kiran, Leela Dhar Jagudi, Budhi Nath Mishra and Suresh Rituprara among others. There are sessions on Hindi journalism in foreign lands, as well as on writings by women writers and works in translation. The Rahul Sankrityana Manch at LBS National Academy will also feature poems in Hindi by the officer Trainees of the 94th Foundation Course. The Open Mic session curated by Nojoto will also feature the best offerings from young poets in Hindi and English.
As in the previous years, many Dehradun authors are featured. In addition to Ganesh Saili and Stephen Alter, who are in conversation on their recent books, VoW has Dr S Farooq, who will be in discussion with Dr Jaskiran Chopra and Dr Anjali Nauriyal, and Lokesh Ohri with Anoop Nautiyal. VoW will feature Dr Venu Sanon, Ruby Gupta, Ira Chauhan, Manik Kaur Sadana and Bijoya Sawain, among others. There are three sessions on Kashmir, as also two book launches, including ‘Kashmir as I see it’ by Ashok Dhar.
For those with a spiritual bent of mind, there are many offerings, starting with the tribute to Guru Nanak Dev, with a rendition of his ‘bani’ set to the traditional instruments used by the wandering minstrels who accompanied him on his Udasis (travels). This comes from the noted exponent of the Guru’s Bani – Prof Nivedita Singh of the Punjabi University, Patiala. Then there is another session on the Life and Message of Baba Nanak with noted scholars on Sikhism and the Bhakti Movement. There is a session on Mindfulness under the title, Designing Destiny, in which senior administrator Sanjay Bhatia will be in conversation with Praveen Dagdee. Sadhvi Bhagwati’s new book, ‘Come Home to Yourself’, will be discussed on the 17th November morning, and the penultimate session is by Swami Samarpananada on ‘Living Hinduism and the World of Religions’.
The winners of the prestigious REC VoW Awards will be announced by Dharmendra Pradhan on 17 November, and he will also deliver the Valedictory Address on ‘Life, Letters and Literature’!
“The three day festival promises to be a real treat for the book lovers and art aficionados of Dehradun, as this festival is now a signature event, much awaited by one and all in Dehradun,” said Dr BK Joshi, the head of the DLRC, where the press conference was held. He went on to say that his library saw a spike in footfalls after every edition of VoW, and that this was a boon to the readers of Doon.