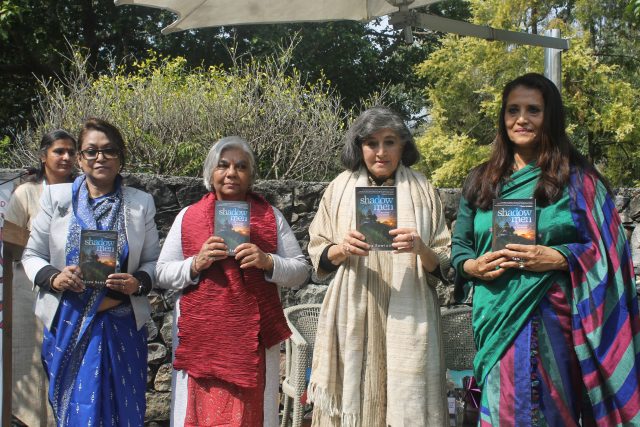 DEHRADUN, 29 Feb: Doon Book Club held a reading and discussion session at a local club, today. Aloka Niyogi, an educationist and a freelance writer was in conversation with author and a translator Bijoya Sawian and her publisher Renuka Chatterjee.
The morning began with Nita Roy launching the book, “Shadow Men” – A Novel and Two Stories in the presence of an illustrious gathering of Academics, Book lovers, Activists and community members of Dehradun and Mussoorie. Shalini Dhanda introduced the panel. Sawian hails from Shillong Meghalaya. Her Novel thus lays bare the festering wounds of a splintered hill state and its detachment with the main stream India. She talked about what inspired her to write the book and how the North East feels about mainland India and her personal connection with both. She has also translated many books which deal with the life and culture of the Khasis community of North East India.
Publisher Renuka Chatterjee, a well known name in the publishing Industry who has worked with Penguin, Harper Collins India to name a few, and now the vice president of Speaking Tiger shared interesting anecdotes of the publishing world. She also threw light on the stages a book goes through before it is chosen. Niyogi asked interesting questions which took the discussion to a different height. Once the Book discussion was over Sawain took questions from the audience. The audience participated with full vigour and were enlightened and quite enthralled. The Doon Book Club founders were missed at the event, as both are out of station. The Book Club is headed by Shamsa Saaed along with co- founder Manju Jalal and Nita Roy.
Former bureaucrats and literature lovers SK Das and his wife Vibha Puri Das, NS Napalchayal, writer Roshen Dalal, Harjit Lally, Ratna Manucha were present amongst others.