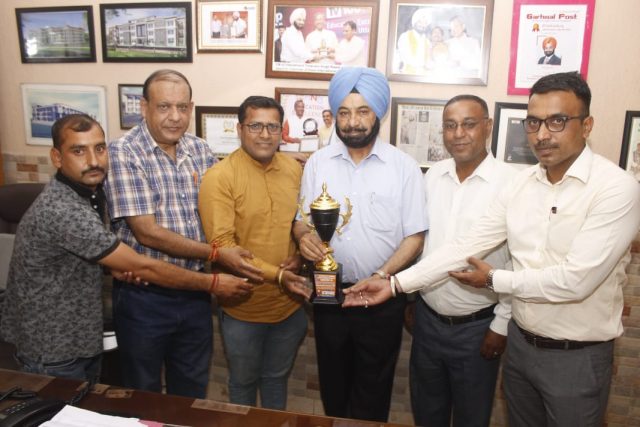 By OUR STAFF REPORTER
Dehradun, 25 Jun: To make Cricket more popular among young people of the state, the Uttaranchal Youth Cricket Association and Cricket Association of Uttarakhand are jointly going to organise the ‘Salauddin Butt Memorial Shivalik Engineering College U-19 Championship’ from 26 June onwards at Doon International School Riverside, Paundha.
This information was shared by Javed Butt, General Secretary of the Association, at the unveiling the Trophy of the Championship in the premises of Doon International School.
The Chief Guest on the occasion was Chairman of Doon International School DS Mann. While unveiling the trophy, the Chief Guest said that four teams would participate in this tournament which would be played on league cum knockout basis. These included GSR Cricket Academy, Little Star Cricket Academy, Himalayan Cricket Academy and Doon Lion Sporting Club. The league matches will be played for 30 overs, each, while the final match will be off 40 overs.
DS Mann recalled Javed Butt’s father, the late Salauddin Butt, who belonged to the Indian Army and worked hard all his life in the service of the nation. Mann praised his dedication, bravery and discipline. He expressed confidence that the tournament would be played in the spirit of sportsmanship, dedication and discipline.
Others present on the occasion were Vice President of the Association Giridhar Sharma, Media Coordinator Ashutosh Mamgain, General Secretary Javed Butt, District President Amit Thakur and many others.