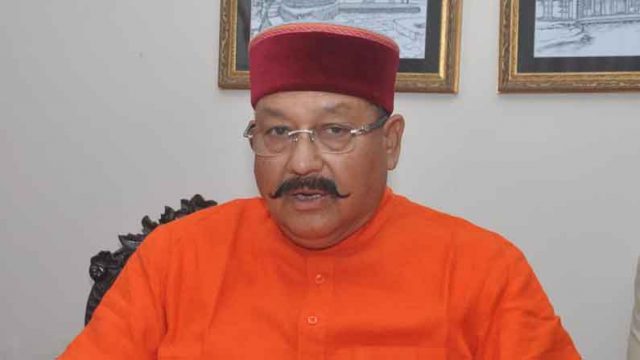 Dehradun, 25 Jun: Tourism Minister Satpal Maharaj today announced that there was no proposal to develop the walking route to Kedarnath, Yamunotri, Hemkund Sahib on the lines of the Vaishno Devi Shrine in Jammu & Kashmir. He was responding to a starred question from independent MLA Preetam Singh Panwar during Question Hour in the State Assembly, here, today. Panwar had asked whether the government would develop the trekking route to Kedarnath, Yamunotri and Hemkund Sahib on the lines of the Vaishno Devi Shrine and set up similar infrastructure and amenities along the routes as in Jammu & Kashmir. Maharaj said there was no such proposal under consideration of the government. In response to a supplementary question, Maharaj responded that the departments concerned had been entrusted the job of developing and maintaining the trekking route to these shrines as well as set up facilities along the routes. Besides this, the arrangements and the maintenance work for the same was reviewed on a regular basis by the respective district magistrates and the Commissioner, Garhwal. In response to a starred question by BJP member Deshraj Karnwal, Irrigation Minister Satpal Maharaj denied any possibility of waiving the irrigation charges due from farmers of the state. Karnwal had sought to know why the government was not considering waiver of irrigation charges as they too were facing financial stress. Maharaj said the government merely earned a meagre amount of Rs 2.95 crores per annum as irrigation charges against irrigation provided to the farmers from all the canals, tubewells and minor irrigation channels, whereas it was incurring an annual expenditure to the tune of Rs 85 crores towards running and maintenance of the canals, channels, tubewells and payment of electricity bills. He further pointed out that the irrigation charges had last been revised in the year 1994 and had not been raised since. Therefore there was no question of considering any proposal regarding waiver of the charges! In response to another question by BJP member Deshraj Karnwal, Irrigation Minister Satpal Maharaj declared that there was at present a backlog of 532 vacancies in the irrigation department including 45 Group B posts of Assistant Engineers (Civil) and 10 Group B posts of Assistant Engineers (Mechanical) and remaining 477 Group C posts under various categories. He added that the government was in the process of sending the requisition for filling up of these vacancies to the State Service Commission and State Subordinate Selection Commission. In response to a question by Karnwal, the Irrigation Minister admitted that the government was aware that the water flow of Ganga at Triveni Ghat in Rishikesh had shifted away from the Ghat and this was leading to a lot of inconvenience for the pilgrims visiting Rishikesh to offer prayers as well as in bathe in the holy river. A proposal was under consideration on turning the flow of the river towards the Ghat once again and would be undertaken as part of the upcoming Mahakumbh project! In response to a question, Social Welfare Minister Yashpal Arya claimed that the government reviewed the projects and schemes under the Social Welfare Department from time to time to ensure that only the actual eligible persons benefitted from the schemes. He added that there were at present eight different welfare schemes targeted just for the SC and ST beneficiaries.

Garhwal Post has established itself as a credible, balanced and forward looking newspaper in India. Based in Uttarakhand, the daily is read by the aware, socially and culturally responsible, high-income elite of society.
Contact us: info@garhwalpost.in
https://garhwalpost.in/filipina-dating-sites-free/ https://garhwalpost.in/nice-place-for-date-night-near-me/ list of local dating sites