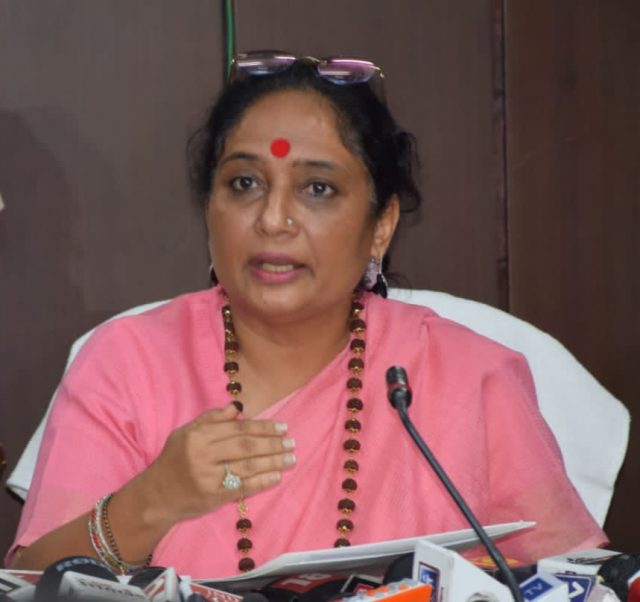 Mussoorie, 24 Nov: Several presentations were made on the concluding day of ‘Strong Uttarakhand @ 25’ Chintan Shivir by the Secretaries in-charge of various departments today. A presentation was also made on the short and long term plans of the forest department and skill development on the last day of the contemplation camp at Lal Bahadur Shastri National Academy of Administration (LBSNAA).

In the presentation made by Forest Department’s Chief Conservator of Forests Anoop Malik, he claimed that the department is working on long and short plans. Five new destinations would be selected and developed in the next five years to promote eco-tourism. Similarly, 10 new destinations would be developed in the next ten years by creating international marketing linkages. A State Action Plan would be prepared to prevent human-wildlife conflict. Also, Rapid Response Teams would be formed in sensitive areas. Stakeholders who are local residents were being trained. In order to reduce the menace of monkeys in the mountain areas, the monkeys are being sterilised after catching them. At the same time, efforts are being made to restore the traditional elephant and tiger corridors.

Secretary, AYUSH, Dr Pankaj Kumar Pandey presented a roadmap of the department regarding AYUSH. He said that AYUSH had to be re-established. Uttarakhand had to be made a hub of Ayush and Yoga. Private investment was being promoted in this area. Efforts are being made to upgrade the AYUSH infrastructure. Presently, 300 wellness centres are running across the state. A Cell for Yoga and Naturopathy is being set up. Pandey also spoke about the certification of medicines through a national level system. Emphasis was laid on increasing the production of herbs. He pointed out the lack of enough trained doctors and paramedical staff in the department. Efforts are being made to develop model AYUSH villages in the state. He added that homoeopathy is proving to be very effective in treatment of dengue.

A presentation was also given by Dr Pankaj Kumar Pandey on the efforts being made in the field of industry, in which he claimed that good work is being done in Haridwar and Pantnagar SIDCUL to promote industry. Self-employment is emphasised for economic development. Marketing efforts are being made to promote local products by getting them GI tagged. Good work is being done in the Chief Minister’s Self-Employment Scheme. Special attention is being given to tourism and service sector. Work is being done on One District Two Products. People from the industrial world are being motivated to invest in the state. Work is also being done on the land bank for investment.

Secretary, Skill Development, Vijay Kumar Yadav said that according to the demand of the industries, the skill development department has made arrangements for training people in various fields. Arrangements have been made for long term and short term skill development. Arrangements are also being made to up-skill the faculty. Efforts are on in this direction to train people with updated training material and infrastructure. Special training programmes are also being organised at ITIs. The training is being done with the help of good institutions of the country. A skill hub has also been set up at ITI, Sahaspur. He said it is also necessary to have mutual coordination among the departments imparting training.

During the presentation of the Skill Development Department, District Magistrate of Nainital, Dhiraj Gabryal suggested establishing Hunarshalas in the mountains for the purpose of preserving the hill building construction style and providing employment. R Kumar suggesed making the skill development department the nodal department.

Yesterday, in the last presentation, Drinking Water Secretary Nitesh Kumar Jha had made his presentation on Natural Resource Management. He said that, at present, Dehradun and Haridwar are the two districts in the state where water shortage is being felt most. Efforts are being made to end it. He said that there is need to spread awareness about drinking water on a large scale in the entire state.

Garhwal Post has established itself as a credible, balanced and forward looking newspaper in India. Based in Uttarakhand, the daily is read by the aware, socially and culturally responsible, high-income elite of society.
Contact us: info@garhwalpost.in
serious dating sites australia free ts dating sites ph dating site