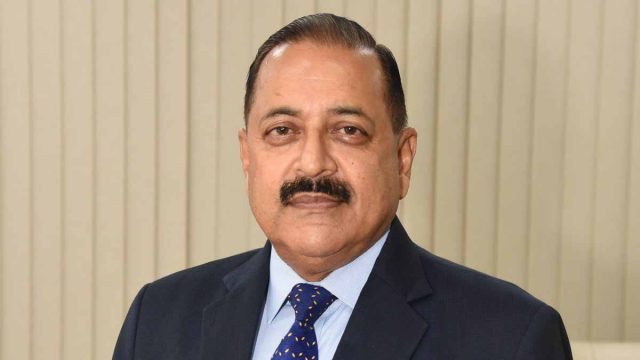 By OUR STAFF REPORTER
DEHRADUN, 27 Jun: Participating in the virtual rally of Doiwala Assembly constituency on Saturday, Union Minister Dr Jitendra Singh said that under the leadership of Prime Minister Narendra Modi, attention has been paid to the development of all areas of the country. The top priority was the development of hill states. Dr Singh said that the Corona infection was greatly controlled under the leadership of the Prime Minister. In Uttarakhand too, the government of Chief Minister Trivendra Singh Rawat did a good job. Here, excellent work was done in coordination with government, administration and civil society. 1500 tests  for Corona were being done daily in Uttarakhand. There was no shortage of preparations to deal with the pandemic in the state. In the year 2017, where ICUs were established in only 3 districts in the state, now ICUs have been set up in all the districts of the state. In many ways relief was provided to the poor and the farmers.
The Union Minister said that about 2 lakh 34 thousand migrants were brought back from other states. Ration has been made available to them on their return to Uttarakhand. Those people who have the National Food Security Scheme card of any state would be given benefits like the white and pink cards under One Nation One Card Scheme. Those who do not have a card would also be given free benefit of 5 kg of rice and 1 kg of dal per unit under the ‘Self-reliant India Scheme’. Under the Pradhan Mantri Garib Kalyan Anna Yojana (Antyodaya Anna Yojana and Primary Family), 13.49 lakh families were being distributed 5 kg of rice per person per month for 3 months free of cost.
Under the Pradhan Mantri Garib Kalyan Anna Yojana (Antyodaya Anna Yojana and Primary Family), 13.49 lakh families were being distributed 01 kg of pulses per ration card for 3 months free. Under the Social Welfare Department, the pension of three months’ April, May and June have been paid in advance. A total of 3 lakh 64 thousand workers have been employed in MNREGA in the state. More than 23 thousand new registrations have also been done in MNREGA. Out of these, more than 17 thousand people have been provided work.
Chief Minister Trivendra Singh Rawat lauded the BJP-led workers for discharging their responsibility towards society responsibly. He said that BJP workers were always ahead to help the needy in every way during the lockdown at Covid-19. He said that the BJP government was doing development work in the state. All the promises he made in his vision document during the election are being fulfilled. 85 percent declarations have been completed in a quarter of three years. Honouring the sentiments of the state, he made the biggest announcement to make Garasain the summer capital. Its notification has also been issued. Under Prime Minister’s leadership, the country was facing difficult situations with self-respect. He assured the party workers that he would fulfill all the promises by fulfilling the responsibility given to him with full devotion and honesty.
On this occasion, BJP District President Shamser Singh Pundir administered the oath to all the workers to work loyally and fulfil their obligation towards the society. Party officials and activists were present on the occasion, including Brij Bhushan Gairola, Karan Bohra, Nagina Rani, Ashok Raj, Rajkumar, and Vinay Kandwal.

Garhwal Post has established itself as a credible, balanced and forward looking newspaper in India. Based in Uttarakhand, the daily is read by the aware, socially and culturally responsible, high-income elite of society.
Contact us: info@garhwalpost.in
https://garhwalpost.in/single-man-2022/ https://garhwalpost.in/dating-definition-sociology/ trials matchmaking