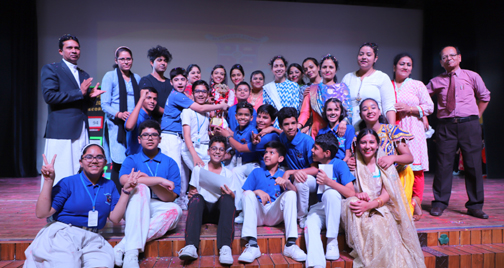 By OUR STAFF REPORTER
Dehradun, 17 May: Exuberance, the three days culture fest of St Patrick’s Academy, opened with a bang on 15 May with creativity spilling over the stage as the children one after another competed with others in various events.
The children from Classes 1 to 5 participated class-wise while, for the Middle and Senior School, the competition was among the four Houses of the School – Price, Fintan, McMahon and Fitzpatrick.
On day one, the young girls of the school ramp-walked on the stage with Shrishti, the second runner-up, Ms Uttarakhand.
Earlier, Shrishti Puriyal, the Chief Guest of the day, and Rajiv Mittal, the Guest of Honour, were greeted by the School Principal Bro Joseph. After the lighting of the ceremonial lamp, the young dancers took to the stage with their synchronised moves. Following the act, the Student Reporters of the School Magazine, ‘The Patrician Ink’, amid light banter, invited the Editorial Board, the School Principal and the Chief Guest of the School to release Edition 2018-19.
Shrishti, in her address, asked the children to believe in themselves, irrespective of their academic results. Once the Cultural Fest was declared opened, the Junior School Children took the stage and participated in various competitions – Recitation, Story Telling and Mimicry. The GK Quiz-held for the senior children was a well conducted and contested event. Simultaneously, the off stage events – Flower Arrangement, Soap Carving, Rangoli, etc., took place and the children were seen immersed in giving a free rein to their creativity.
The second day of Exuberance took off on a musical note with the children competing in various musical categories.
The latter half of the day was devoted to the dramatic events. The judges, who had come from various schools in the vicinity, had only words of appreciation for the children.
On day three, the old familiar stories by the famous authors got unexpected face-lifts and twists as the Patricians enacted them on stage with much zeal and passion. It was a well fought competitive event and garnered an appreciative response from the audience.
The dances presented by the Four Houses of the School took the audience on a voyage to different parts of the country, giving them glimpses of the culture and ethnicities. The children swaying to the beats, in beautiful and coordinated moves, were cheered by their respective Houses.
The Chief Guest on the day was Marshal Tyagi, an upcoming singer who is already making waves with his talent. The children broke into thunderous applause when he sang for them, one of their favourite numbers- Shape of You.
Exuberance 2019-20 reached its crescendo when the results were announced and the trophy was lifted by Price House.  Some hearts were broken and some became jubilant; some accepted the results with grace and some took time to recover. However, the spirits of the children remained undaunted and ‘Exuberant!’