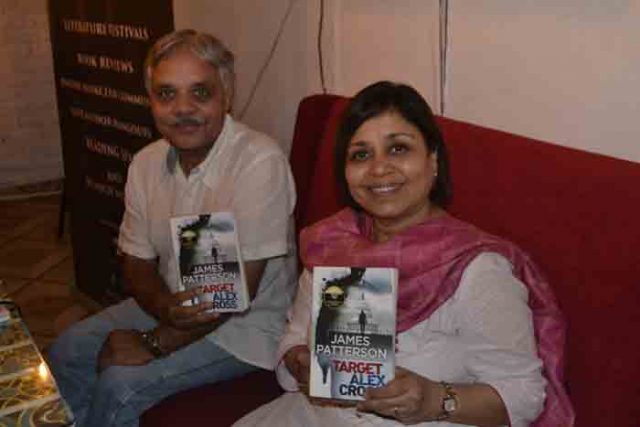 Dehradun, 26 Jul: With the vibe of a thriller, mystery, and murder, ‘The Booknerds’ held a hangout at a local bistro, focussing on the James Patterson blockbuster, ‘Target: Alex Cross’.
Vidushi, a team member of The Booknerds began the session with an introduction of the Booknerds. The Booknerds is a literary startup with the vision of connecting book lovers across the country. It has conducted over 130 meet ups and events that it calls The Booknerds Hangout.
Rohan Raj, Co-founder of the Booknerds, then proceeded to tell the participants about the book, ‘Target: Alex Cross’ and the author. He then introduced the Lead Discussant for the event, Rachna Malhotra, who is a Senior English Faculty at RIMC, Dehradun, and the moderator, Sanjeev Srivastava, who is an avid reader. He is a Chemical Engineer from IIT Roorkee and has worked in oil and gas industries, both, in India and abroad.
The lead discussant and the moderator threw light on some of the memorable parts of the book, and the author.
James Patterson used to work in finance before he started out as an author at the age of 49 and, till date, has written over 147 books.
The book in the spotlight for the hangout was his twenty-sixth novel in the Alex Cross Series.
The author’s philanthropic gestures and inspiring acts were also discussed. James Patterson hands out awards to independent bookstores and has created a website by the name of readkiddoread.com to encourage young readers.
His collaboration with other authors was also applauded, such as his partnership with President Bill Clinton and Indian writer Ashwin Sanghi.
Despite all the criticisms faced by him, the participants were inspired and recognised him to be a literary treasure.
‘Target: Alex Cross’ was well received by the readers. A discussion around the table broke out regarding the characters and their situations. An in-depth discussion about the protagonist’s married life and family took place. The different assassins, and their progression, in the story were also praised.
Questions on the author’s writing style, his mention of the Skybox and his caution regarding the exploitation of electronic media were also considered. After the interesting exchange of views came to an end, a story writing activity was initiated. The members had to scavenge through the newspapers and look for crime stories that they had to shape and merge to form an original crime story.
With great ideas generated all around, the competition was won by Arpit Sharma and Mayank Rawat, who were awarded certificates and goodies.
Neha Raj, co-founder of the Booknerds, then presented the mementos to the Lead Discussant and the Moderator.

Garhwal Post has established itself as a credible, balanced and forward looking newspaper in India. Based in Uttarakhand, the daily is read by the aware, socially and culturally responsible, high-income elite of society.
Contact us: info@garhwalpost.in
gay middle eastern dating app