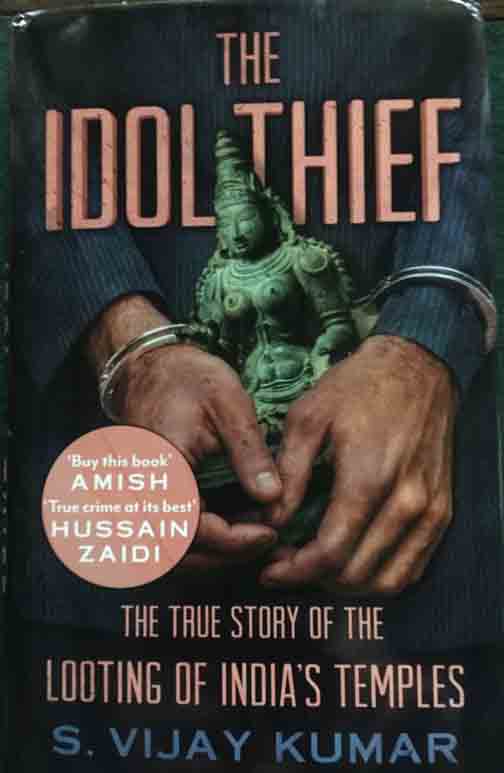 Fifty years ago, the school boys from my village had piled their benches and desk blocking the sole road that snaking its way through the township of Gauchar in Garhwal. ‘Twas a dark moonless night, they waited with bated breath. Rumours of thieves on the prowl hung in the air. From afar one could see the headlights of a car hurtling downhill. Rounding the curve, it screeched to a halt confronted by a manmade barrier. There was no where to go. With a triumphant roar, the boys lunged at the dusty vehicle, at the gang of thieves –men who stole gods. When the boot was opened, out tumbled a gunny bag with a priceless statue from one of the many temples dotting the Garhwal Himalaya.
If you met the author S. Vijay Kumar, you’d find a lay shipping executive from Singapore, who at night doubles as a passionate art-thief-hunter, helping authorities crack elusive temple thieves. The book takes you, a step at a time, through the plundering of our heritage today. This is what he does. He relentlessly tracks and chases these ugly smugglers, who have been helped along, no doubt, by corrupt museum officials, jilted girlfriends, two faced academics and shady temple looters.
In order to put a stop to the rampant loot of unprotected temples, in 1984, the Idol Wing of Tamil Nadu moved 3000 antique statues and idols from unprotected temples to larger temples and museums. But there are still 3000 more to be shifted to safety even as I read this review. Meanwhile innocuous-looking, fleet footed hustlers of our heritage are on the prowl. For instance, there are folks like the celebrated art-dealer Subhash Kapoor, whose warehouses and galleries in New York when raided yielded Indian treasures worth $100 million. You meet his ex-girlfriend after their bitter break-up – that’s why she ratted on him to help Indian authorities get to him. Then there’s Selina Mohamed, his girlfriend and associate forging the paperwork for art work that he would try to sell to museums and galleries. Yes! As luck would have it, unfortunately, we live in a you-scratch-my-back-I-scratch yours world. There’s the cozy nexus between robbers-smugglers, buyers and experts. Statistics? They are alarming: a thousand pieces are vanishing each single day. Ironically, these statuettes were made to be a housed in the very temples from which they have been plundered. You can see them best in the temple’s sanctorum sanctum under the light of oil lamps, to the ringing of bells, the chanting of ancient hymns and chants, to the accompaniment of drums if not in processions seated astride their magnificent chariots. They were never meant to be locked away in gilded cages of glass under spot lights.
Things are improving but very gradually, between the years 2000 to 2012, there were zero restitutions. But the tide is turning ever so slowly: in the four years from 2014 to 2018 twenty-seven artefacts have come home.
High time to turn up the heat. No?