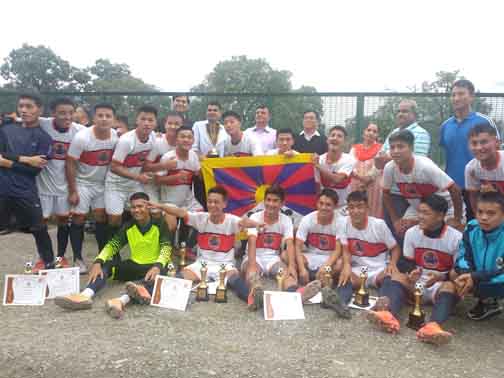 Mussoorie, 31 Jul: The final match of 15th Alok Ranjan Memorial Inter School Football Tournament was held on the ground of Oak Grove School, here, today. The final match was inaugurated jointly by Manish Maithani, Head Coach, Doon Elite sSoccer Academy, and JP Pandey, Principal, Oak Grove School.
The much awaited grand final match was played between St George’s College, Mussoorie, and Tibetan Homes School, Mussoorie. Tibetan Homes School lifted the Trophy by defeating St George’s College, 2-0. For THS the first goal of the match was scored by Pema Kungsan in the 17th minute and the second goal by Tsering in the 42nd minute.
The Trophy for the Best Player of the Tournament was awarded to Shamin Margo of THS and the Best Goal Keeper Award was given to Samrat Pathak of SGC. The Trophy for the Most Emerging Player of the Tournament was given to Vaibhav Raj of Oak Grove School.
Chief Guest Manish Maithani presented the trophy to the winning team. He also appreciated the efforts of the school in organising the football tournament.
Principal Pandey stated that the children had a passion for football as in the past. He thanked the Chief Guest and said that the main aim of organising the tournament was to promote football and to provide a platform to the players.
The referees for the matches were from Northern Railways – Umesh Bora, Lalit Singh Rawat, Mukesh Dutt and Mr Bhasin. Among those who witnessed the match were Dr Pathan, Principal, THS, Mussoorie, Dr Sanjay Dube, Head Master, Oak Grove Boys’ School, Anand Kumar, Head Master, Oak Grove Junior School, Vinay Kumar, Dr Atul Kumar Saxena, Anupam Singh, RN Yadav, Mohd Shadab Alam, Abhishek Rawat and other faculty members of the school.

Garhwal Post has established itself as a credible, balanced and forward looking newspaper in India. Based in Uttarakhand, the daily is read by the aware, socially and culturally responsible, high-income elite of society.
Contact us: info@garhwalpost.in
https://garhwalpost.in/actually-free-hookup-sites/ https://garhwalpost.in/calgary-hookup/