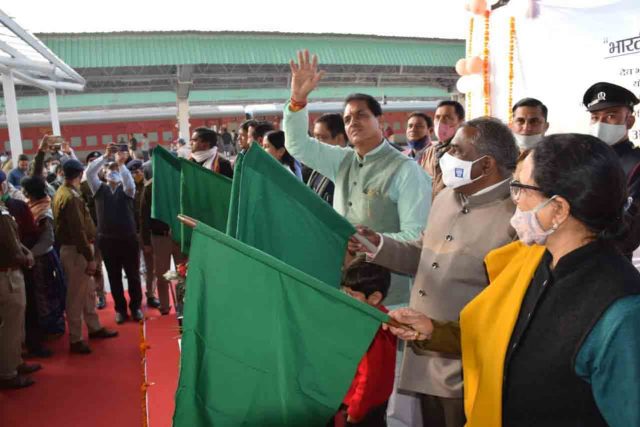 By Our Staff Reporter
Dehradun, 11 Jan: From today, train services have started from the YogNagari Railway Station in Rishikesh. The Jammu-Tawi Express arrived here at 10:30 in the morning, which was welcomed by the people of Rishikesh. Trains will also run from YogNagri Rishikesh during the Mahakumbh to be held in Haridwar. It may be recalled that this is the first station of the Rishikesh-Karnprayag railway project.
Chief Minister Trivendra Singh Rawat has thanked Prime Minister Narendra Modi and Railway Minister Piyush Goyal for this. The Chief Minister said that the Prime Minister had special affection for Uttarakhand. The Chardham road project and the Rishikesh-Karnprayag rail projects in progress were the dream projects of the PM. Rawat said that the dream of the railway network in the hills of the people was going to be realised soon. The Rishikesh-Karnprayag rail project and the Chardham road project would prove to be lifelines for Uttarakhand. As a result of these projects, economic activities in the state would increase and livelihood resources would be developed on a large scale. Soon, tourists and pilgrims would be reaching Char Dham temples using the railway service, while the local people would get the opportunity to travel as well as transport their products by train.
It may be recalled that work on the 125 km long Rishikesh-Karnprayag railway project of Rs 16,216 crore in Uttarakhand is currently underway. The first station of this project has been completed already and the project is targeted to be completed by 2024-25. The Chief Minister is also constantly monitoring this project. Their progress is being reviewed from time to time.