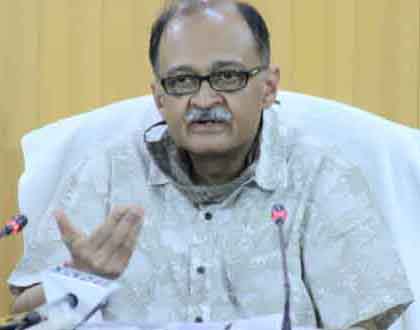 DEHRADUN, 2 Jun: Chief Secretary Utpal Kumar Singh today asserted that Uttarakhand was faring better in dealing with the Corona pandemic.
At a press conference held here, today, Singh said that, while the total number of Corona cases in the country had reached close to 2 lakhs, in Uttarakhand, there were only about 1,000 Corona positive cases, thus far! He asserted that the state was performing better than the national average as far as controlling the spread of the pandemic goes! He added that Uttarakhand comprised about 1 percent of the country’s population, but the total number of Corona cases in Uttarakhand were just about half percent of the country’s total. He further reminded that roughly one-fourth of the total number of Covid-19 cases in Uttarakhand had been cured.
Singh added that the total number of active cases in the state was 746 as of Tuesday afternoon and there were a total of 7 deaths and all the persons who succumbed had been suffering from some serious ailment apart from Corona. He added that the national average of death rate for Covid infected persons in India was about 2.83 percent, while it was less than 1 percent in Uttarakhand. The doubling rate of Corona cases was improving again, he claimed.
Reminding that contact tracing was very important in the fight against Corona, he disclosed that about 4 thousand contacts had been traced, so far. Arrangements for quarantine and treatment were continuously improving in the state. The number of beds in the institutional facilities had increased to about 14 thousand. Conceding that there was a possibility of the numbers increasing further, he asserted there was no reason to panic as the state was well prepared to deal with the cases. He pointed out that about 95 percent of the cases had either no symptoms or very few symptoms. Most cases detected as Corona positive in the state had a travel history. There was no local transmission in the state.
The Chief Secretary said that the government had identified 75 cities of the country in view of the high number of Covid-19 cases there. All the people who come here from these cities would have to stay in government quarantine for 7 days.
They would be allowed to go home if they did not show symptoms of Covid, but they would still have to stay in home quarantine for 14 more days. Those who came from places other than those identified would have to stay home quarantine for 14 days. Registration would have to be done when coming from other states and going from one district to another within the state. Permits would also have to be obtained to move from any Red Zone to another location.
The Chief Secretary claimed that 2.60 lakh persons were working in MNREGA in the state and 11 thousand new job cards had been created. Of these, work had also been provided to 7000 persons. Secretary, Health, Amit Negi was also present at the press conference.