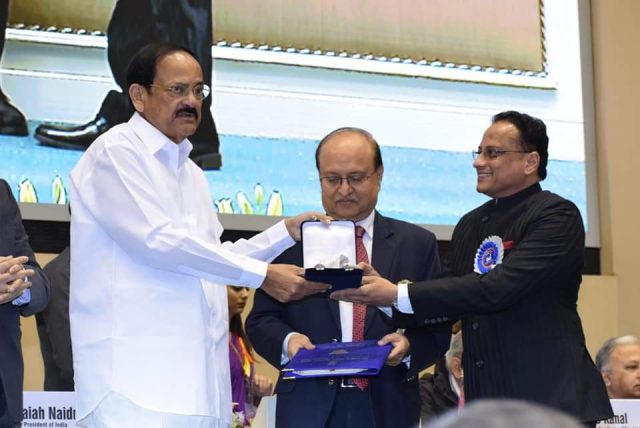 DEHRADUN, 24 Dec: Vice President M Venkaiah Naidu conferred the first prize for being the ‘Most Film Friendly State’ on Uttarakhand as part of the 66th National Film Awards function, held, in New Delhi on Monday. On behalf of the state, Secretary, Information, Dilip Javalkar received the award from the Vice President. This time, Uttarakhand has been selected by the Union Ministry of Information & Broadcasting under the National Film Awards for the year 2018. The award has been given to Uttarakhand in appreciation of its efforts to promote the film industry, create a comfortable environment for film production, encourage local talent and art, initiate the reopening of closed cinema theatres, and for creation of a Film Development Fund. In his address, Vice President M Venkaiah Naidu, while congratulating Uttarakhand, said that commendable efforts had been made by the state government to create a conducive environment for film shooting in the state. Secretary, Information, Dilip Javalkar said that Uttarakhand felt greatly encouraged because its efforts had been recognised in the form of the award and would introduce more incentives for the shooting of films. He expressed hope that the filmmakers from India and abroad would come in large numbers to the state to shoot their films. He reminded that Chief Minister Trivendra Singh Rawat was also the Chairman of the Uttarakhand Film Development Council and under his guidance the film policy of the state had been made more attractive. Additional Resident Commissioner Ila Giri, Deputy Director and Nodal Officer, Uttarakhand Film Development Council, KS Chauhan were also present on the occasion.