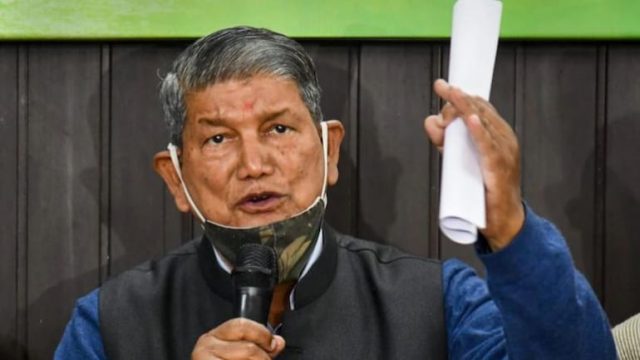 By Arun Pratap Singh
Dehradun, 22 Dec: Veteran Congress leader Harish Rawat is again displaying some desperation with respect to the upcoming assembly elections in Uttarakhand. In a tweet, he has questioned the party leadership for not declaring him the chief ministerial candidate, on the one hand, and has claimed that he is also thinking that perhaps his time has come to rest now.
“Is this not strange? When we have to swim in the sea of election, the party organisation should extend supporting hand, but has rather turned its face the other way and is playing a negative role. I have to swim in the sea where the ruling party has released many crocodiles and my hands and legs are tied. Sometimes it feels that I have worked too much and now it’s time to rest. I am in dilemma, the New Year may show me a way, and Lord Kedarnath will show a path to me.”
Harish Rawat is considered to be a shrewd politician, whose statements and tweets are usually layered intentionally hardly mean what they apparently say. They have hidden messages which are understood by those these target. However, such a tweet at a time when the elections are about to be declared any day now has baffled even the political pundits. They believe that it is also an indication of some desperation at not being declared the CM candidate when, according to some TV surveys, “he is the top choice of the people of Uttarakhand”. While he has lobbied hard to be declared the CM candidate in Uttarakhand, the party organisation has desisted from doing so even after making him in-charge of the party’s campaign committee. According to the political pundits, Harish Rawat being the senior most party leader is also undoubtedly its tallest leader currently in Uttarakhand and therefore he does manage to convince the Party High Command to change the structure of Pradesh Congress Committee as and when he wants but, despite this, he has failed to get himself declared as the CM candidate.
Ever since the formation of Uttarakhand, with the exception of one PCC Chief, Yashpal Arya, who was the choice of the then CM ND Tiwari, Harish Rawat’s choice has prevailed. Arya was replaced with Kishore Upadhyay, who was his protégé in the party. However, differences developed between them, soon, and well before the 2017 elections. Upadhyay was then replaced by Pritam Singh, who was also considered Rawat’s choice. But, soon after, Pritam Singh moved over to the Indira Hridayesh camp. After the death of Indira Hridayesh earlier this year, Harish Rawat managed to get Pritam replaced with Ganesh Godiyal.
According to insiders in the Congress, what specially hurts Harish Rawat currently is the fact that a “relatively junior” leader Devendra Yadav has been made the party in charge by the high command. Both do not share a cosy relationship with each other. Rawat has not been able to manage Yadav. Every time Harish Rawat has publicly demanded to be declared the CM candidate, he has been snubbed by Yadav, who has responded each time with the claim that the party will fight the elections under a collective leadership and not under the leadership of any individual.
Meanwhile, sources close to Harish Rawat claim that the party high command has been misled on Uttarakhand by some crocodiles within the party, both, in Uttarakhand and in the Central leadership. They claim that the party high command is ignoring the fact that Uttarakhand is one of the few remaining states where Congress is still a popular party and, yet, it is ignoring its most senior and popular leader in the state.
Harish Rawat feels that the organisation is playing a negative role instead of cooperating with him to lead the party to a win in the upcoming elections. According to political analysts, this could be one tactic to pressurise the party to declare him the CM candidate, as Rawat is not a person who gives up easily despite sounding so on many past occasions. He has never given up hope and the spirit of a fighter added to his still raging ambition keeps him going!

Garhwal Post has established itself as a credible, balanced and forward looking newspaper in India. Based in Uttarakhand, the daily is read by the aware, socially and culturally responsible, high-income elite of society.
Contact us: info@garhwalpost.in
gay meets near me local black singles she likes me but started dating someone else