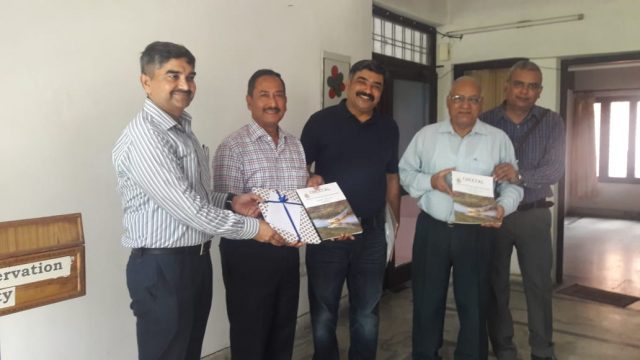 DEHRADUN, 15 Sep: The Wildlife Preservation Society, established in 1958, held a meeting today at its office, here. The Speaker for the day, Dhananjai Mohan (IFS) delivered an informative talk on ‘Wildlife In Urban Environs’. Dhananjai is a graduate of IIT Kanpur. His passion for nature and wildlife took preference over his engineering career and he joined the Indian Forest Services in 1988. He is an established Ornithologist and has co- authored a book, ‘Threatened birds of Uttarakhand’. He has an old association with the Society and won an inter school competition as a student and was awarded the prize by the founder President, Sir Pratap Singh, the Maharaja of Nabha. He has judged inter school debate competitions conducted by the Wildlife Preservation Society in the past years. The Guest of Honour for the event was SS Rasaily, an IFS officer of the Uttarakhand Biodiversity Board. Rasaily has previously contributed articles for the Journal of the Society, ‘Cheetal’. The journal is amongst the oldest such publications in the country. The Executive Vice President, Dr Prashant Singh, welcomed the speaker and the guests. Two new life members, Suryaveer Singh Pathania and Deepika Singh, were issued their membership certificates by Mallika Shukla, wife of Rashmi Kant Shukla, IFS, President of WPS. Pathania’s son, Bhriguraj, is already a member of the Society. Deepika’s grandfather, the late Maharaja Digvijai Singh of Sailana, was a life member. A number of members attended the meeting. While Udayan Singh drove all the way from Narauli in UP, Alok Negi drove down from Rudraprayag. Senior forest officers Vinod Rishi, retired IFS, and SS Bist, retired IFS, also attended the meeting. Rishi happens to be the first IITian to have joined the IFS. Accomplished wildlife photographers Abhai Mishra, Rahul Kala, Abhishek and Adikarthik Shankar were also present. SK Singh from Forest Survey of India, Dr SS Khaira, Dr Akhlaq Husain, Dr SP Singh, Pranav Goel and Ankit Chamoli asked questions and cleared their doubts pertaining to urban wildlife with the Speaker. The ‘monkey menace’ and snakes also featured in the discussion. Senior members Vijay Nath, Upendra Arora, Air Commodore Amul Kapoor (Retd), Puneet Kaura and Himanshu Joshi were also present. President Rashmi Kant Shukla thanked the Speaker and Guests and asked the younger members to take active part in spreading awareness on wildlife conservation. He informed the gathering that the Society would celebrate Wildlife Week from 2 October onwards and reach out to schools and colleges.