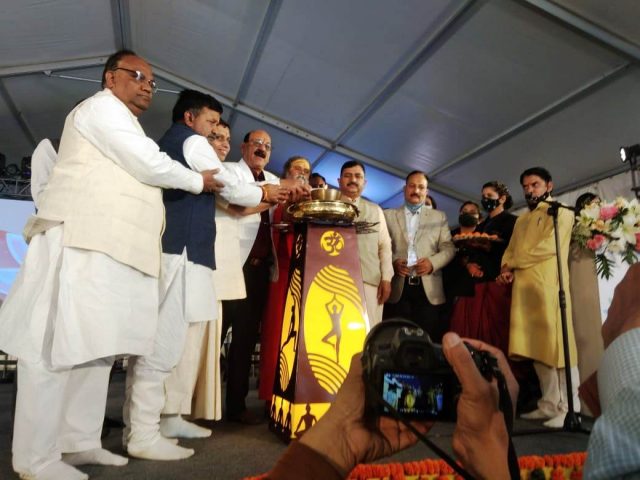 Dehradun, 1 Mar: State Minister of Agriculture Subodh Uniyal, President (All India Akhada Council) Narendra Giri, Chairman, Patanjali Yogpeeth, Acharya Balakrishna, inaugurated the seven day long International Yoga Festival 2021, here, on Monday. The festival is being jointly organised by Uttarakhand Tourism Development Board (UTDB) and Garhwal Mandal Vikas Nigam (GMVN).
Addressing the session, Subodh Uniyal said, “We are here at the world-famous location Rishikesh also known as Yognagari to celebrate our age-old practice of Yoga. The aim of Yoga is not only to keep us fit but also to end the evil within the human being. Prime Minister Narendra Modi has always spread the message of well-being done by yoga, which has increased its popularity nationally and internationally.”
Acharya Balakrishna said, “Yoga has played a very vital role in boosting immunity especially during the time of Covid. The regular practice of Yoga has helped in keeping diseases away from the body. Yoga is also the cure for many diseases that have no solutions in medical science.”
Narendra Giri added, “The real definition of yoga is to reconcile the soul with the divine. Yoga also leads to samadhi and peace which are very important in one’s life.”
GMVN MD Dr Ashish Chauhan disclosed that all classroom arrangements have been made following the guidelines on Covid-19 issued by the Government of India and the State Government. Nearly 350 seekers were registered on the first day of the event.
Adding further, he said that Master Chef Pankaj Bhadoria will join the event and hold a session on the importance of healthy food. Along with this, a food competition will also be organised during the event.
Chairman, Garhwal Mandal Vikas Nigam, Mahavir Singh Rangad, GMVN Vice-Chairman Krishna Kumar Singhal, Municipal Cooperation Chairman Roshan Raturi, Additional Director, Uttarakhand Tourism Development Board (UTDB), Vivek Chauhan, Guru Gopal Das, Swami Parmatmanand, Usha Mata, Yogi Siddharth, Grandmaster Akshar, Social worker Bachchan Pokhriyal, Rishikesh Mandi Parishad President Vinod Kukreti, Pushpa Barthwal, Swami Atma Swaroop, BJP leader Chandraveer Pokhriyal and others were present during the inauguration.