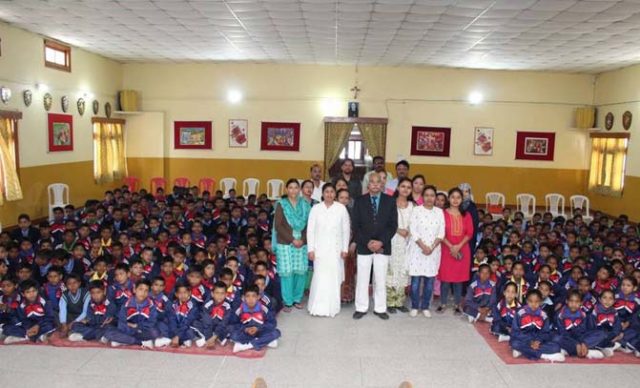 By OUR STAFF REPORTER
Dehradun, 12 May: United Nations celebrated Global Road Safety Week from 6 to 12 May. This year’s theme is “Save Lives, # Speak Up”. Public Awareness Lectures on Road Safety were delivered by Dr BKS Sanjay of Sanjay Orthopaedic, Spine and Maternity Centre, Jakhan, at Army Public School, Dehradun; Tibetan Homes School, Rishikesh, Rajpur and Mussoorie; Doon University; St Lawrence High School, Waverley, Mussoorie;  and SOS Centre. In addition to the lectures, Dr Sanjay also gave interviews on Akashvani, Dehradun, and other local channels.
Dr Sanjay said that more than a million people die worldwide every year on the roads. This situation is quite serious in India. Almost five hundred thousand accidents occur in the country, annually. Out of these, approximately one hundred and fifty thousand people die in these accidents. One fourth of those who survive become permanently disabled.
According to a study conducted in 2016 by the United Nations Economic Social Commission for Asia and the Pacific, India is losing the equivalent of 1 to 3% of the GDP. According to his research, 90% of these accidents occurred due to the driver’s negligence. The main causes of accidents are overtaking, speeding, drunken driving and, recently, use of the mobile phone while driving.
Dr Sanjay said that aggression on the road was a common scenario in India and it seemed that Indians took pride in breaking the traffic rules. Knowing very well the consequences of road traffic accidents, it seemed that the people were more adventurous on the road in India than anywhere else.
According to the recent UN and World Bank reports, almost one fourth of the people in India are still living below the poverty line. Those who cannot afford three times meal a day cannot afford costly medical treatment. In India, 50-70% of the hospital expenses are born by the patient even in government-funded hospitals and almost 100% from their pocket in private one. Most of people get treatment after selling their assets like jewellery, land, vehicles, animals and house, etc. Once these are sold, these are difficult to buy back, especially if the person is poor and unemployed. It was necessary for all to spread awareness on preventing these accidents, because they had taken the form of an epidemic. If something is not done, then it was bound to go out of control.
Dr BKS Sanjay and his team have delivered 165 free public awareness lectures and spread the message among more than one and a half lakh students, staff and public of Uttarakhand and neighbouring states. After the lectures, the students, teachers and staff took a pledge to follow the traffic rules in the future.