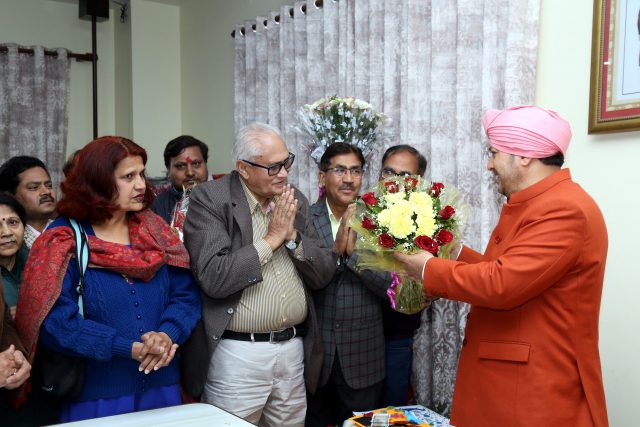 DEHRADUN, 10 Feb: The 19th ‘Appearance Day’ of Mahant Devendra Dass was celebrated today with religious fervour. Thousands of devotees from Uttarakhand, neighbouring states, other parts of India and abroad reached the Darbar Sahib and congratulated him. The Mahant also blessed the thousands of devotees.
Special prayers were organised at the Darbar Sahib to mark the occasion and ‘prasadam’ was also distributed to the devotees.
It was on 10 February, 2000, that the late Mahant Indiresh Charan Dass accepted Devendra Dass as his disciple. Since then, 10 February has been celebrated every year as the Birthday (Appearance Day) of Mahant Devendra Dass. It was on 25 June, 2000, that Mahant Devendra Dass took over the reins at the Darbar Sahib.
In the morning, today, after routine prayers, the Mahant paid obeisance at the Darbar Sahib and and the holy flag pole. After that, the chief priest conducted the special prayers. ‘Ardas’ was also done as per the tradition.
On the occasion, the Mahant recalled his objective of providing a new and correct direction to society through Shri Guru Ram Rai University and SGRR Education Mission. The Shri Mahant Indiresh Hospital under this mission is devoted to providing quality health services even to the remote and far flung rural areas of the country. On the other hand, SGRR Public Schools being run under the SGRR Education Mission are regularly involved with the task of providing quality education to all classes of society. The Mission would always struggle to bring the backward and poor classes of society into its mainstream.