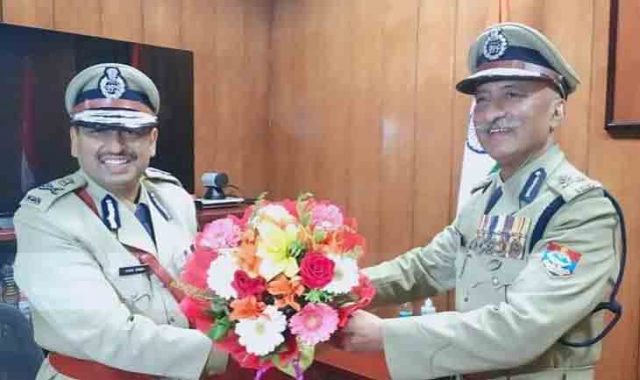 By Arun Pratap Singh
Derhadun, 30 Nov: DG, Law & Order, Ashok Kumar today took charge as Director General of Police, Uttarakhand. He took over charge from outgoing DGP Anil Raturi (1987 batch IPS Officer), who retired this afternoon. The transfer of charge took place at the State Police Headquarters on Subash Road, here, today. A 1989 batch IPS officer, Kumar has become the 11th DGP of Uttarakhand. He was second seniormost in the state police cadre, after MA Ganpathy (1986 batch). However, Ganpathy is presently not only serving at the Centre on deputation but has, in fact, served as DGP Uttarakhand before leaving for Central deputation. Kumar is likely to serve as DGP for 3 years. Raturi, too, served as DGP for almost a 3 year period. In the customary handing over and taking over of charge, the outgoing DGP, Raturi, handed over the ceremonial baton to Kumar.
Earlier in the day, Raturi was given a warm farewell at a ceremonial parade held in the Police Lines. The parade began at 9 a.m. At the onset, Raturi was welcomed to the Parade site by Kumar. This was followed by a grand farewell parade, at which, both, Raturi and Kumar addressed the personnel. The parade was led by Rekha Yadav, Assistant Superintendent of Police, Dehradun, with Second in Command Shekhar Suyal, Deputy Superintendent of Police, and Parade Adjutant Pallavi Tyagi, Deputy Superintendent of Police, Nehru Colony.
Various branches of the Uttarakhand Police, Traffic Police, Civil Police, PAC, Women PAC, Commando Squad and ATS also participated in the parade. The outgoing DGP also reviewed the parade. The programme was coordinated by Sub Inspector Poonam Prajapati and SI Reserve, Fire, Manish Pant.
Addressing the parade, Raturi said that he was overwhelmed by the honour and praised the new DGP, Ashok Kumar, for his spirit and commitment and expressed the hope that the State Police would achieve more in the coming years. He also used this occasion to thank all his colleagues not only for the parade but also for extending exemplary cooperation to him during his entire tenure in the state Police. He also thanked his colleagues, his teachers at school, the media as well as the governments under whom he had the opportunity to serve the state and the country.
Raturi further stated that he could say without any doubt that the police officials of smallest designation in Uttarakhand deserved to be counted among the best and very rational, disciplined, hard working police officials of the country. Due to their hard work and commitment, Uttarakhand Police officers such as SIs were decent, humane and very professional. He said that Uttarakhand Police was counted as the most civilised police force of the country. All the lower ranking officials had done very challenging tasks despite their meagre salaries. Raturi also praised the work of the state police force in dealing with the present Covid challenge and observed that Uttarakhand was recognised by the Centre to be among the most efficient states with respect to dealing with the lockdown and other Covid pandemic related work.
Addressing the Parade, DGP Ashok Kumar praised the leadership of Raturi and said that he had learnt a lot from his senior colleague, and would make every effort to follow in his footprints. Kumar further noted that the outgoing DGP had a sympathetic and conflict-free relationship with his associate officers. Every officer and employee was given the opportunity to work with full freedom on whatever work was given to him or her, and he continued to encourage the officers from time to time.
Some of the achievements of the Uttarakhand Police during the tenure of Raturi as DGP in the past three years cited on this occasion included Operation Smile which was operated successfully to locate missing children, launch of a hill patrol unit on the lines of CPU for the hills, introduction of the e-challan system, training of more than 6 thousand police personnel, and scaling of Mount Everest by the state police team in 2018.
It was also recalled at the Parade that three police stations of Uttarakhand were ranked among the top ten from a list of 15,000 police stations in the country, last year. Radha Raturi, Additional Chief Secretary and wife of the outgoing DGP Anil Raturi, Ashok Kumar, ADG PV Prasad, all IGs and DIGs and other senior police officers were present on the occasion.

Garhwal Post has established itself as a credible, balanced and forward looking newspaper in India. Based in Uttarakhand, the daily is read by the aware, socially and culturally responsible, high-income elite of society.
Contact us: info@garhwalpost.in
paid dating sites in south africa