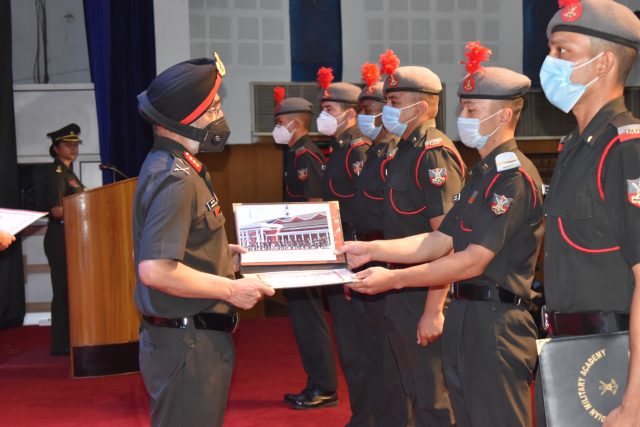 By Our Staff Reporter
Dehradun, 9 Jun: The Award Ceremony of Spring Term-21 Passing Out Courses comprising the 148 Regular Course and 131 Technical Graduate Course was conducted at the Khetarpal Auditorium of the Indian Military Academy, here, today.
The Gentleman Cadets were felicitated by Lt Gen Harinder Singh, Commandant, IMA. He presented medals and awards to the outstanding Gentlemen Cadets who excelled in various fields during their pre-commission training at the Academy.
The training imparted to the Gentlemen Cadets at Indian Military Academy is designed to provide a comprehensive knowledge of military fundamentals and leadership, as well as proficiency in basic military skills. It aims to develop the qualities of character, intellect, fitness and competence needed by future ready officers, who at all times in their careers must be prepared to lead.
According to the IMA, while the COVID-19 outbreak disrupted training in most educational institutes in the world, it implemented an effective COVID action plan integrating all preventive guidelines outlined by Ministry of Health, Army Headquarters and Army Training Command. It was, however, ensured that there was no dilution in training standards of the Gentleman Cadets, even as all precautions were taken and a healthy routine evolved for them. The training at the Academy has continued for almost 16 months without a break, reflective of the resolve and commitment.
The Commandant Prize Distribution and Award Ceremony is an important event which recognises and encourages the Gentlemen Cadets to achieve excellence at individual level and contribute constructively in team efforts to infuse a sense of camaraderie amongst them. Accordingly, Medals and Rolling trophies have been instituted at IMA, which symbolise the highest standards achieved at individual and company level.
On the occasion, a large number of Gentlemen Cadets and Foreign Gentlemen Cadets from Friendly Foreign Countries were felicitated.
The Commandant mentioned in his address that the country demands willing, unhesitating, unfaltering obedience and loyalty from each young Officer. He further elaborated that leadership is a composite of a number of qualities. Among the most important are self-confidence, high morals, self-sacrifice, fairness, initiative, decision, dignity and courage. The Commandant also said it was important for an officer to maintain a competitive streak within the parameters of sportsmanship and fair play at all times. The urge to win and excel as a team should always be there. In the profession of arms, it is always a collective and a team effort that is important and there are no runners up in war. He commended all for having achieved such high standards despite the constraints and challenges due to the spread of COVID-19. The Commandant wished the course all the success and glory ahead in the various arms and services allotted to them.

IMA awards prestigious motivation trophy to GCs from Bhutan, Afghan GC also felicitated
In an immaculately conducted Award ceremony at the Khetarpal Auditorium, the Indian Military Academy awarded the prestigious motivational trophy to a Foreign Gentlemen Cadet (FGC) from Kingdom of Bhutan in true recognition of his excellent all round performance, which also reflected in the individual awards won by the FGC.
Junior Under Officer, Kinley Norbu, won the awards on being adjudged as Best in Physical Training, Best in Turn out and Drill. He is getting commissioned in to Royal Bhutan Army and is part of 84 FGCs passing out this term from nine countries.
A special award of recognition was also presented to FGC, Ehsanullah Saadat, from Afghanistan, for his zeal and untiring efforts to excel. The Afghan GC also won the award on being adjudged for best in service subjects, outdoor exercises and book review amongst FGCs.
IMA commands great respect across the world armies for its exacting training standards. Every fourth GC in the academy is from a foreign army. This award reflects the pride which IMA takes in its assessment and award policy for excelling GCs of passing out course, irrespective of nationality. These inspire the GCs to compete and inculcate a spirit of winning. 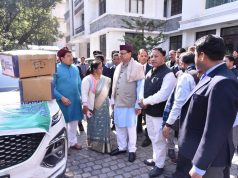 Garhwal Post has established itself as a credible, balanced and forward looking newspaper in India. Based in Uttarakhand, the daily is read by the aware, socially and culturally responsible, high-income elite of society.
Contact us: info@garhwalpost.in
over 40s dating