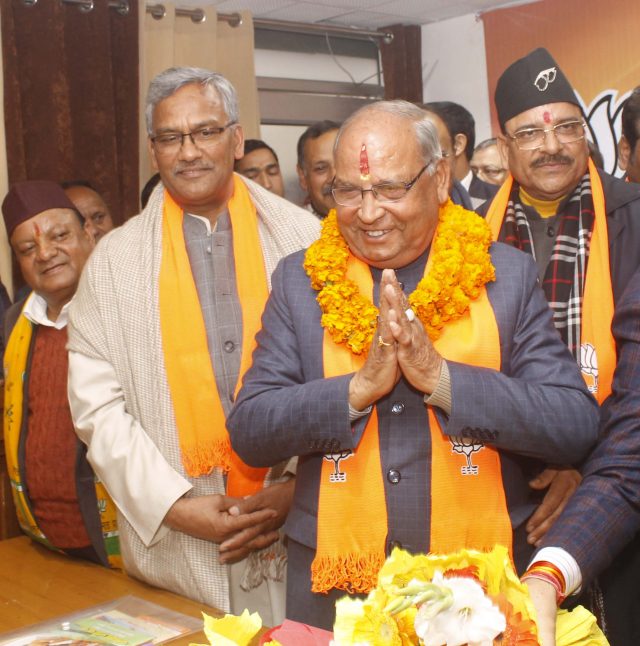 DEHRADUN, 16 Jan: Senior BJP leader and MLA from Kaladhungi (District Nainital) Bansidhar Bhagat was elected unopposed today as the new president of Uttarakhand BJP, as had been indicated by Garhwal Post, yesterday. The 65-year-old Bhagat takes over from Nainital MP Ajay Bhatt, who had the most successful tenure as the BJP State Chief. Bhagat will be the eighth BJP State Chief of Uttarakhand. After the notification was issued yesterday by Balwant Singh Bhauryal, the Election Officer nominated by the party, no nominations were filed and, as expected, the name of Bhagat was proposed today at the meeting of the party held in the presence of central observer and Union MoS Arjun Meghwal. The other central observer, Shivraj Singh Chauhan, could not make it to Doon. Soon after, the resolution on Bhagat’s name was proposed by the outgoing BJP State Chief Ajay Bhatt, as the Centre appeared to be keen on this name, only. Since there was no one to contest the election against Bhagat, he was elected unopposed. Soon after the meeting, Meghwal declared his name as the new state BJP chief in his interaction with the press. Among the leaders present at the meeting were Union HRD Minister Ramesh Pokhriyak ‘Nishank’ and Chief Minister Trivendra Singh Rawat. A large number of party MLAs were also present. HRD Minister Nishank said the party would benefit hugely from Bhagat’s long political experience. Speaking on the occasion, Bhagat termed the 2022 Uttarakhand assembly elections as his top priority and asserted that he would boost the morale of each and every party worker so as to ensure BJP’s victory in the polls. Bhagat’s tenure is expected to be quite challenging since he has replaced Ajay Bhatt, who proved to be the most successful of all the BJP State Presidents in the state, so far, and to emulate this feat will be a daunting task for Bhagat. It may be recalled that under the leadership of Bhatt, the party won the 2017 assembly elections and the 2019 Parliamentary polls, retaining all the 5 Lok Sabha seats. After taking over from Tirath Singh Rawat in 2015, Bhatt ensured victory for the party in most elections including those of urban local bodies and panchayats and even the bypolls. Bhagat, born on 8 August in Bhimtal (Nainital) in 1951, joined the RSS in 1975 and has been elected as BJP MLA on 6 occasions. He was elected MLA for the first time in 1991 and became a minister in undivided UP in 1993. He became a minister in 2000 in the interim BJP Government after the formation of Uttarakhand as a separate state and yet again in 2007. However, this time he failed to make it to the cabinet, probably because a large number of Congress leaders who joined the party in the run up to 2017 assembly elections were preferred as ministers in the new government. He is known to be of a gentle temperament and is considered able to carry young and old, alike, along with him.