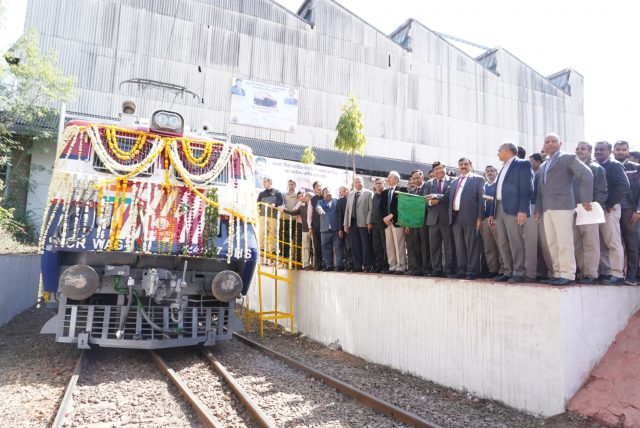 Haridwar, 8 Feb: In a major technological breakthrough, Bharat Heavy Electricals Limited (BHEL) has successfully developed a state-of-the-art Regeneration System through in-house R&D efforts, for Indian Railways’ fleet of conventional electric locomotives.
The country’s first such regenerative 5000 HP WAG-7 Electric locomotive was flagged-off by Ghanshyam Singh, Member Traction & Ex-Officio Secretary to the Government, Ministry of Railways, in the presence of Atul Sobti, Chairman & Managing Director, BHEL from the company’s Jhansi plant. Directors on the board of BHEL and senior officials from Indian Railways were also present on this occasion.
The idea of developing the energy efficient Regeneration System was mooted by Indian Railways and BHEL responded to it by successfully developing the technology in-house, giving an impetus to the ‘Make in India’ initiative. With this, a new line of business has opened for BHEL and the company has expanded its footprint in the transportation sector.
Presently, Indian Railways’ electric locomotives have a dynamic braking system where the energy generated during application of brakes gets wasted in the form of heat. BHEL has developed a system introducing the regenerative braking concept in these locomotives, which will feed the energy back to the overhead power lines. This will result in significant saving in energy consumption for Indian Railways. The system has already been tested in a 5000 HP, WAG7 Type electric locomotive of Indian Railways at Jhansi.
Significantly, with this landmark success, BHEL has become the first organisation to successfully demonstrate the concept of regenerative braking system for DC traction motor driven conventional electric locomotives.
As a pioneer in the transportation sector, BHEL has been working very closely with Indian Railways for the last six decades to meet their requirement through innovate technologies and providing ‘Make in India’ systems and equipment for all types of rolling stock of Indian Railways. The company has created a dedicated centre for research and development in transportation technology and manufacturing facilities at its Bhopal, Jhansi and Bengaluru plants.
BHEL has embarked upon a transformation journey for ‘Creating a BHEL of Tomorrow’ and is pursuing various diversification initiatives for increasing non-coal business. It is extending its offering in the transportation segment and has equipped itself to foray into manufacturing of metro coaches, rolling stock for high speed railway, Railway electrification and environmental friendly and efficient rolling stock for Indian Railways.