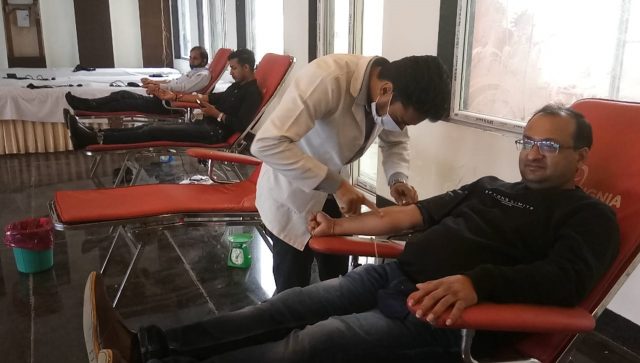 By Our Staff Reporter
Mussoorie, 5 Oct: In collaboration with Rotary Club Mussoorie and Old Boys of Rama Devi Inter College, a blood donation camp was organised in the memory of Kuldeep Raj Sahni in the auditorium of Radha Krishna Temple, here, today. People participated enthusiastically under the supervision of a doctor from Mahant Indresh Hospital.
State President of Uttarakhand Hotel and Restaurant Association, Sandeep Sahni said that blood donation strengthens human bonds by highlighting the unity of humanity. He also appreciated the work done by Rotary Club in many areas like health, education, sanitation, etc. He said that the camp is organised in the memory of his father and it would continue to be held for people in need.
The doctor of Indresh Hospital said that donating blood is believed to improve heart health, reduce the risk of heart diseases and strokes. Excess amount of iron in the blood can increase the risk of heart attack. By donating blood regularly, the excess amount of iron is controlled. He added that, many times, the amount of blood in the body of patients becomes so low that they need to take blood from some other person. In such an emergency situation, people should come forward.
Arjun Kaintura, President of Mussoorie Rotary Club, said that Rotary Club is continuously working for social causes and organises blood donation camps. He said that, during the Corona pandemic, the number of donors to blood banks had come down by 80-85 percent, as donation camps were not held. There was shortage of blood for the patients of blood cancer and other serious diseases. The youth of the country needed to come forward and donate blood for the people.
Present on this occasion were Dr Trishala, Amit Chandra, Mohit, Rotary Club President Arjun Kaintura, Secretary Sanjay Jain, Treasurer Nitin Goyal, Sandeep Sahni, Pramod Sahni, NK Sahni, Vipul Mittal, Nitin Gupta, Nitish Mohan Agarwal, CR Arya, Rajat Kapoor, Kapeesh, Kaushiki Mohan, Sandhya Ani, Dhan Prakash Agarwal, Anuj Tayal and others.