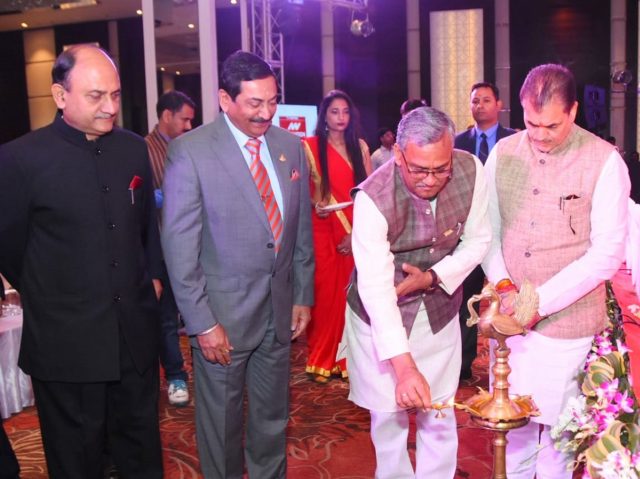 DEHRADUN , 4 Nov: Chief Minister Trivendra Singh Rawat today announced that a Sainya Dham (Military ‘Shrine’) would be set up in Dehradun on 60 bighas of land. He claimed that this Sainya Dham would become the fifth Dham of Uttarakhand and reminded the audience that Prime Minister Narendra Modi had spoken about setting up of a military dham in Uttarakhand. The Chief Minister was addressing the guests after inaugurating a day-long seminar on defence matters, titled “Mere Sainik, Mera Abhiman” or ‘My Soldiers, My Pride’ hosted jointly by the state government and leading Hindi daily Amar Ujala. Rawat informed the gathering that the land for the Military Dham would be provided by the Nagar Nigam and the funds for the construction of the Dham had also been arranged. He noted that for his government and for the people of Uttarakhand, honour of the soldiers was an issue of highest priority. 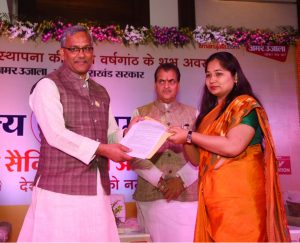 He noted that the country had a strong military and for this the world respected the country. He said that a country could remain strong only as far as its military was strong. He also praised the Centre for abrogation of Article 370 and claimed that it was a major hurdle to the peace and progress of Jammu & Kashmir as well as the country. The CM also handed a letter of appointment on this occasion to widow of martyr Bhagwati Prasad Bhatt, deputy commandant, Swati Bhatt. Speaker of the Uttarakhand Assembly Premchand Aggarwal reminded the audience that it was the then Prime Minister, Atal Bihari Vajpayee, who had created Uttarakhand. He also reiterated that a large number of people from Uttarakhand were engaged in the responsibility to protect the country and its borders. Lieutenant General Gambhir Singh Negi (Retd) said that the people of Uttarakhand were hardworking, brave and had a deep sense of devotion to duty. The soldiers of Garhwal and Kumaon Regiment had contributed in every war that the country had fought. In China, Pakistan and Kargil war, they faced enemies firmly. There were many martyrs, whose names were written in golden letters. In the first session, the topic was changing aspects of challenges to the national security. The session was moderated by Consultant Editor of Amar Ujala, Vinod Agnihotri. Speaking on the occasion, Lt Gen OP Kaushik said that the biggest challenge for India in South Asia was China. China was working with long term planning. It had begun to surround India by almost ‘buying off’ all the small countries of South Asia. He claimed that India’s position in the Indian Ocean was becoming vulnerable because of China. Kaushik said the situation in Pakistan had worsened in the past 40 years. He said that India needed to break Pakistan again if the need so arose. He said that Prime Minister Narendra Modi had also spoken on this subject. He also reminded that Sri Lanka had leased out its major port to China for 90 years and even Bangladesh was also leaning towards China. Former Chief of Research and Analysis Wing (RAW) Alok Joshi said that Uttarakhand had an open border of 300 km with Nepal and 350 km with China. China and Nepal’s relations had improved and Nepal had started distancing from India. In such a situation, Uttarakhand would have to develop itself as a frontline state. Former RAW officer Renuka Mattoo (IPS) said that it was wrong to blame the intelligence agencies after every terror attack since it was too late to be able to convert the inputs received by the agencies into action plan and prevent terror attacks. In yet another session on the internal security moderated by Resident Editor of Amar Ujala Sanjay Abhigyan, DG, Law& Order, Ashok Kumar said that social media was a big challenge in the changing times. He supported the posting of para military forces on the borders and said that para military forces received specialised training and were justifiably deputed on the borders. The other panellists were Lt Gen KK Khanna (Retd), Lt Gen SK Jha and former Commandant, IMA, GS Negi.

Garhwal Post has established itself as a credible, balanced and forward looking newspaper in India. Based in Uttarakhand, the daily is read by the aware, socially and culturally responsible, high-income elite of society.
Contact us: info@garhwalpost.in
dating website for artists speed dating brisbane different online dating sites