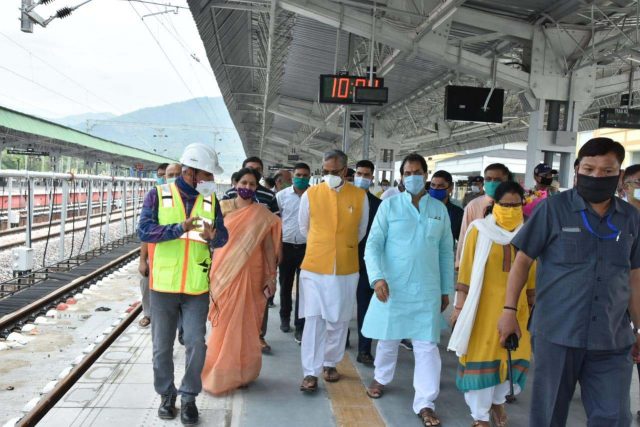 By Our Staff Reporter
Dehradun, 23 Jul: Chief Minister Trivendra Singh Rawat, today, conducted an on-site inspection of the Rishikesh railway station built as part of the Rishikesh-Karnprayag railway project. The CM also planted trees at the Rishikesh railway station. He obtained information from the officials of the Rail Vikas Nigam Ltd about infrastructural facilities being set up at the railway station.
Chief Minister Rawat said that this railway station built in the city of Rishikesh had been given a modern form. Special attention had been given to environmental adaptation in its construction. A separate utility facility had also been provided for elderly and disabled people. He said that after the completion of the construction work on the Rishikesh-Karnprayag railway line, the people of the state would not only have this transport facility, but also the pilgrims and tourists coming to Badrinath and Kedarnath would be greatly benefited. Prime Minister Narendra Modi had given many gifts to Uttarakhand in the field of infrastructure development. All-weather roads, air connectivity and construction of railway lines would provide all kinds of facilities for transportation in the state. After the construction of the Doiwala-Uttarkashi rail line, all the the Char Dham of Uttarakhand would be connected by rail.
After inspecting the railway station, the CM also conducted a surprise inspection of the 7.5 MLD multipurpose sewage treatment plant, constructed at Chandreshwar Nagar, Rishikesh. It has been constructed by the Uttarakhand Pey Jal Nigam under the Namami Gange scheme. The purification of water is being done after tapping the Chandreshwar Nala, Dhalwala Nala and Shamshan Ghat Nala by this sewage treatment plant. After confirming the water quality standards, it is being released into the Ganga River.
The CM said that STPs are being made at various places in the state under Namami Gange to maintain the cleanliness and continuity of the Ganga. Due to the efforts of Prime Minister Narendra Modi, many works were being done under the Namami Gange project across the country. The treated water from STPs would also be used for irrigation.