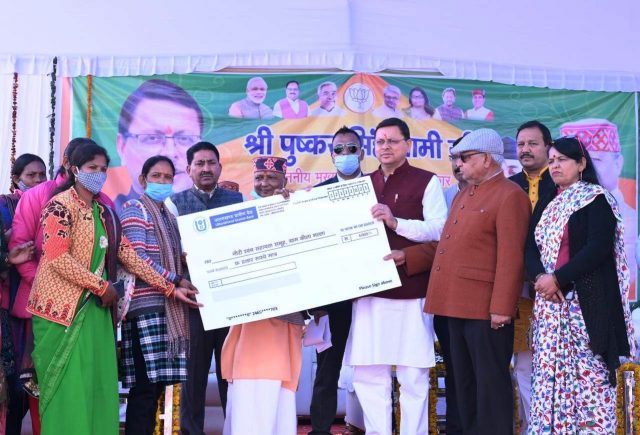 DEHRADUN, 12 Dec: Chief Minister Pushkar Singh Dhami, today made several announcements while addressing the gathering at Patotia Nainidanda campus of Lansdowne area under district Pauri, as the chief guest. The announcements were in respect of various developmental schemes for the Lansdowne constituency. He also laid the foundation stone of 15 schemes costing about Rs 90 crores, inaugurated 2 schemes and announced several development schemes. The Chief Minister inaugurated the scheme of electricity distribution subdivision office Rikhnikhal costing Rs 40.06 lakhs, electricity distribution subdivision office Nainidanda costing Rs 21.10 lakhs under Vidhan Sabha Lansdowne and some road projects under the Central Road Infrastructure in the development block Rikhnikhal of Pauri Garhwal. These road projects included, the work of improvement of Jagmohan Singh Motor Road (NH 9) costing Rs 2019.57 lakh, improvement work costing Rs 1194.30 lakh of Marchola Suraikhet Banjaro Pokhara Satpuli Pauri Highway 32 under Central Road Infrastructure funds, new reconstruction work of motor road motor road from Kali river (Kandi) up to secondary school and primary school Chamada (2nd phase Stage-1) in development block Nainidanda,-Haldukhal North costing Rs 64.03 lakh, construction of road from Dhakrikhal Tok to Chowkikhal via Kasona Vichla, located on National Road No 121 under development block Nainidada, Phase II Stage 1 costing Rs 34.56 lakh, retaining wall and other, Improvement work in Ghumkot Pipli Motor Road under Central Infrastructure Fund costing Rs 197.89 lakh, Rewa Rikhnikhal Village Group Pumping Drinking Water Scheme in Rikhnikhal Costing Rs 2791.98 Lakh, Chewada Village Group Pumping Drinking Water Plan costing Rs 910.50 lakh, Nainidanda&#39;s Adlikhal village group pumping drinking water scheme costing Rs 814.26 lakh, Rikhnikhal Kotrisain drinking water scheme costing Rs 132.21 lakh, Government Institute under Jaiharikhal Construction work of laboratory of Ter College Siddhpur costing Rs 91.66 lakh, 3 roomclassroom construction at Government Inter College Siddhpur under Jaiharikhal costing Rs 42.18 lakh, Construction cost of Government Inter College Siddhkhal under Rikhnikhal costing Rs 180.38 lakh, construction of 4 class rooms at Government Inter College Barkhet under development block Rikhnikhal costing Rs 77.94 lakhs, the cost of construction of auditorium at Government Inter College Dhumakote costing Rs 196.86 lakh and the construction of mini stadium in the block Rikhnikhal mini stadium costing Rs 97.31 lakh. On this occasion, Mahalakshmi kits were distributed to 5 women and cheques were distributed to 10 self-help groups by the Chief Minister. Along with this, he bowed his head in the temple premises located in the college. Addressing the gathering, the Chief Minister said that he bowed to this holy land of Tadkeshwar Mahadev. He said that the blessings of the gods be always on every one. He said that this was the land of the immortal martyr General Bipin Rawat. CDS General Bipin Rawat’s death was a big loss for the country as well as Uttarakhand. He said that his government would work on the development of Uttarakhand according to the dreams of General Bipin Rawat. The Chief Minister said that after he took over as CM, the government had taken more than 500 decisions in the last 5 months. The Chief Minister said that the government would complete all development works with the blessings of people. The government was working continuously to ensure that basic amenities reached in every village of Pauri Garhwal. He said that our government was working on the development and ensuring that the benefits of the development reached even to the person standing in the last segment of the society. Dhami said that Uttarakhand is a state where women played a great rile and that the development of the society was possible only through the cooperation of the women and the youth. He said that on the basic mantra of the government was no two options but only committed development. He said that in view of the long standing demands, the government had done the work of increasing the honorarium of PRD jawans, UPNL workers, village pradhans, Anganwadi workers, and Asha workers. He said that a new sports policy had been brought in the state to promote sports talent. He said that the government was working on providing employment to the youth. He said that loans were being distributed under Mukhyamantri Swarojgar Yojana in every district and the process was underway for the recruitment of 24,000 vacant posts in various departments and to connect the youth with self employment. The Chief Minister said that Prime Minister Narendra Modi had given a message to the whole world that the third decade would belong to Uttarakhand. He said that when the state would be celebrating its 25th foundation day, then the state would be a leading and ideal state in all fields of the country.