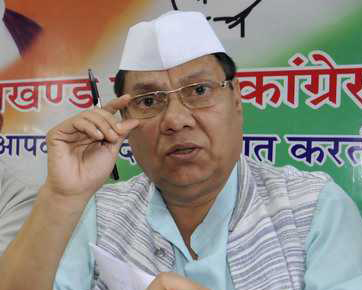 Dehradun, 19 Oct: Uttarakhand Congress Vice President Dhirendra Pratap has accused Chief Minister Pushkar Singh Dhami of playing out a farce in the name of rescuing rain affected people.
He alleged that the CM’s aerial survey was mere political drama aimed at political gains.
Dhirendra Pratap, who spent over 16 hours from yesterday afternoon till early morning, today, in the heavy rain on the road, sharing his personal experience said that so called red alert arrangements made by the Uttarakhand government proved a complete failure on all fronts.
Pratap, who went first from Dhumakot to Ramnagar in Kumaon region, and then from Merchula to Kotdwar in Garhwal region, strongly criticised the absence of all arrangements during his visit to the region. Hundreds of people were stuck on the roads. Among them many were going to attend marriages and were helpless. He claimed that over a hundred weddings got disturbed as food, vegetables, and other essentials were stuck in stranded vehicles and could not reach at their destined locations. In Kumaon region, the traffic was stopped due to heavy rains as water coming from the hills poured on to the roads. A large number of stones had come on to the roads but, neither the PWD nor the forest department were present anywhere to provide relief.
In Garhwal region, near Kotdwar, elephants came on to the road and for 3 to 4 hours people had to run with their children on their shoulders to save their lives.
Dhirendra Pratap described the chief minister’s aerial survey as a political stunt and said that, instead of naming industrial area after the name of Narayan Dutt Tiwari, it would have been better if he had learned some lessons from the great leader.